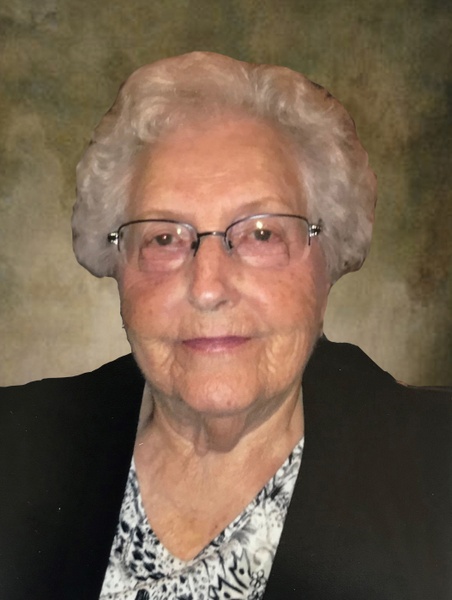 Funeral services for Helen Busch of Morris, MN will be held Tuesday, June 15, 2021 at 1:00 p.m. at Our Savior’s Lutheran Church in Chokio, with Pastor Minette Stalheim Johnson officiating. Visitation will be Monday from 4 to 7 p.m. at the Pedersen Funeral Home in Morris and for one hour prior to services at the church on Tuesday. Burial will be in Calvary Cemetery in Morris.

Putting a Wisconsin girl in the Minnesota prairies was quite a feat but a place she loved.  Helen passed peacefully away on Tuesday, June 8, 2021 at the young age of 99 years and 6 months!  Many who met her and knew her thought her to be younger than her years.  She could be counted on for her wit, sarcasm and being as much of a “spitfire” as her brother used to say, and she passed on these characteristics to many of her children, grandchildren and great-grandchildren.

The youngest of eight children to be born to Rudolph and Helga (Lee) Bjerkness on December 19, 1921 in Colfax, Wisconsin, Helen Sophie entered this world.  She attended Trout Creek Country School until 8th Grade. She graduated from Colfax High School in 1940.  Helen was baptized and confirmed in Holden Lutheran Church in Colfax.

Helen attended one year of tech school in Eau Claire, Wisconsin where she took a business course.  Her first job was with the National Pressure Cooker Company in Eau Claire where she worked in the Personnel Department for five years.  She also worked for a medical doctor as a receptionist and assistant until he enlisted in the Navy.   Perfect training for what would become a lifelong partnership with John in the veterinary practice they built together in Chokio.  From Wisconsin she made the move to the big Twin Cities in Minnesota where Helen worked as a switchboard operator at Kemps Ice Cream.

When a friend asked Helen to attend a dance at the Friendship Club, she “fell head over heels in love” with John “Doc” Busch who was the love of her life and a veterinarian student at the time.  During his senior year, Helen and John were married on August 20, 1949 at Incarnation Parsonage in Minneapolis.  They moved to the University Village where they lived one year in the barracks for students.  During this year, Michael was born, and John graduated in June of 1950.

Upon graduation, John, Helen and Mike made the move to Chokio to begin the veterinary practice.  Once in Chokio, more children followed: Thomas, Barbara, Steven, Sheila and David.  Everyone helped with the family veterinary business in one form or another.  The veterinary business thrived for 50 years where Helen and John worked side by side until they retired in August of 1989.

It was not all work either.  They took many vacations over the years camping with a travel trailer with the kids. In later years, they enjoyed seeing the world taking group tours to Alaska, Hawaii, Canada, the United States, Norway, and Spain.  Helen also was active in boy scouts as a den mother and girl scouts serving as a leader.  She belonged to Till and Tell Garden Club, Legion Auxiliary, Home Makers Club, PTA, and Chokio Commercial Club.  To celebrate her Norwegian heritage, she was a proud member of the Sons of Norway.  Helen was a member of Our Savior’s Lutheran Church, member of ALCW and a Sunday school teacher.   She and John loved to dance, square dance, and take road trips to visit the kids and grandkids for the day or to look at the crops.  Helen was a beautiful and gifted seamstress who made and altered the children’s clothes growing up.  She had the gift of being able to make her own patterns to make clothing for special occasions.   Everyone loved the “soft” jammies she made for the kids and grandkids.  She was always up for a card game of “tic” frequently stating her famous “hocus pocus philly-ocus” to get that winning card!  No one ever had to worry about leaving hungry as Helen made sure you would eat a full meal and try to send leftovers with you home.  Helen loved plants and had a huge garden where she would freeze and can veggies to share with the whole family year around until she moved into Legacy Assisted Living in 2016.

Helen is preceded in death by her loving husband, John, her parents, seven brothers and sisters, and infant grandchildren, Whitnee Busch and Peter Winkels.

In lieu of flowers the family prefers memorials that will be distributed in Helen’s name to local charities. Pedersen Funeral Home in Morris is in charge of the arrangements.

To order memorial trees or send flowers to the family in memory of Helen Busch, please visit our flower store.