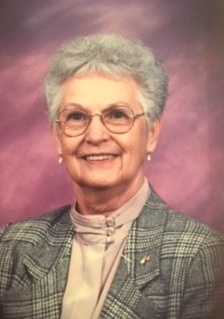 Memorial services for Helen Larson of Glenwood, formerly of Starbuck will be held Saturday, April 6, 2019 at 11:00 a.m. at Immanuel Lutheran Church, rural Starbuck. Reverend Paul Johnson will be officiating. Visitation will be one hour prior to services at the church Saturday. Burial will be in the church cemetery.

Helen Eleanor Olson, born January 16, 1929 in Cyrus, Pope County, Minnesota the youngest of children born to Fred and Alma (Mickelson) Olson.  She graduated from Cyrus High School in 1946 and attended Vocational Schools in the area.  In 1948 she married A. O. Schumann of Morris, MN.  Al was killed in a hunting accident in 1953.  In 1956 Helen married L.E. Larson of Starbuck, MN.  Lennie passed away in 1968 following heart surgery.

Helen was employed as a bookkeeper at the Cyrus Elevator Company; as Ass’t County Recorder and Abstractor in Pope County, Glenwood, MN and at the United Federal Savings and Loan Assoc. in Starbuck.  Helen moved to Willmar in 1992.  Her employment in the four county area was with an agency that helped Sr. Citizens find gainful employment in the Community Work Force.  She has also served as church organist at Immanuel Lutheran Church, Starbuck; at the Harrison Presbyterian Church, rural Atwater; Minnewaska Lutheran Home, Starbuck; Rice Care Center, Willmar and also at the Episcopal Church in Willmar.  Her hobbies included geneology, music, sewing, word games and travel – having visited 45 of the 50 states and overseas to Norway twice.  In 1998 she was awarded her 30 year membership in Sons of Norway Lodge.  She has devoted hours and time to sewing lap robes for Hospice patients and also the Veterans Hospital in St. Cloud.

Helen died on Friday, February 22, 2019 at the Glenwood Retirement Home in Glenwood, Minnesota. She was 90 years old.

To order memorial trees or send flowers to the family in memory of Helen Larson, please visit our flower store.