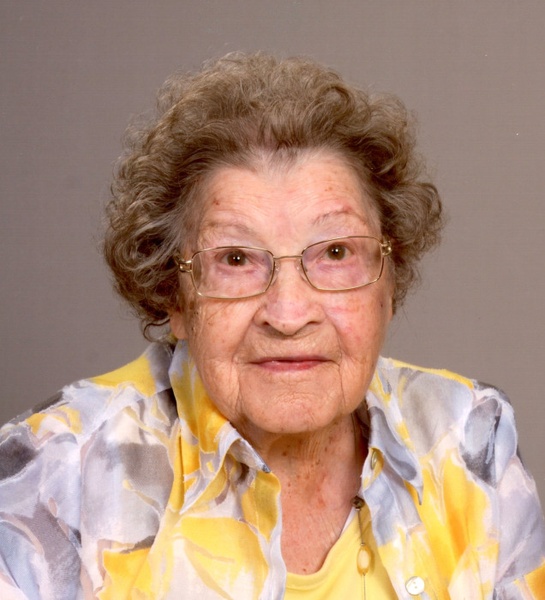 The funeral for Helen Mickelson, of Morris, formerly of Cyrus, Minnesota will be held on Saturday, August 26, 2017 at 10:30 a.m. at the Trinity Lutheran Church in Cyrus, with Reverend Chris Richards officiating. Visitation will be on Friday from 5 to 8 p.m. with a prayer service at 7:00 p.m. at Pedersen Funeral Home in Morris, and Saturday one hour prior to services at the church. Burial will be at the Cyrus South Cemetery, Cyrus.

Helen Anna Leuthard, daughter of Thomas and Anna (Waldvogel) Leuthard was born on November 13, 1919 at home by a midwife in Stevens County. She was the fourth of eleven children.

Helen attended country school only thru the 6th grade because she was needed to help on the family farm. She was united in marriage to Clifford Mickelson on November 15, 1939. They farmed together on the family farm and raised four children. The couple retired from their farm and moved to Cyrus in 1993. Clifford passed away April 11, 1996. Helen continued to reside in her home until November of 2015, when she moved to the Pierz Villa. In May of 2016, she moved back to the area and resided at the Courage Cottage until the time of her death.

Trinity Lutheran Church was her place to go to participate in Do-Days, Church Bible Study and the Deborah Circle. Helen enjoyed cards, puzzles, embroidery, gardening, mowing lawn, cooking, canning, and baking – especially her famous donuts which she shared with everyone. She also treasured spending time with her grandchildren and great-grandchildren, watching them grow and teaching them the art of making lefsa, donuts, and other various interests. The great noises of many children together never bothered her!

Helen passed away quietly and peacefully on Saturday, August 19, 2017 at the Courage Cottage in Morris. She was 97 ½ years old.

Helen's Memorial Folder
To order memorial trees or send flowers to the family in memory of Helen Mickelson, please visit our flower store.