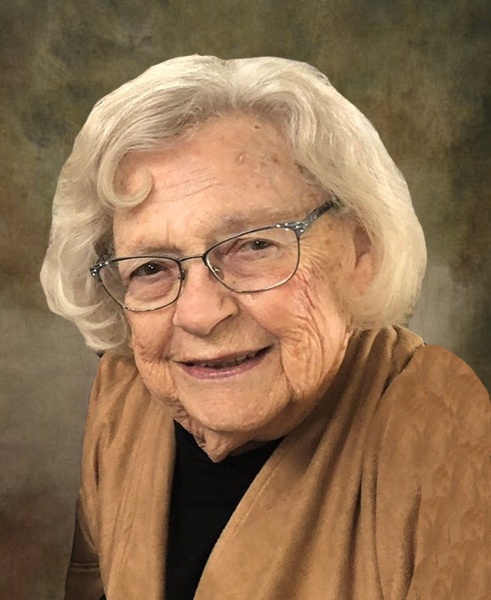 Ila Jean (Zeltwanger) Gramm was born to William and Lillian (Eisenmann) Zeltwanger on May 17, 1929, on the family farm in rural Hancock, MN. Ila attended school and graduated from Hancock Public School in 1947 as Co-Salutatorians with her twin sister Vila. Following school, Ila worked as a bookkeeper for Morris Cooperative. Ila gave her life to Jesus over the summer of 1949 and was baptized in the Apostolic Christian Church in Morris, MN. On December 18, 1949, Ila married Harold Gramm of Gridley, IL. The couple started their family, Patty, Peggy, Greg, Ted, and farmed in Gridley. In February of 1960, the family moved to Minnesota and lived and farmed east of Hancock. On May 1, 1960, Patty was relieved of her battle with childhood leukemia at eight years old. Two more boys, Tim and Rick, were added to the family. Harold and Ila lived and farmed in Hancock until retirement in 2010. They then moved to Skyview Plaza and enjoyed the fellowship there. On December 18, 2019, Harold and Ila celebrated 70 years of Christian marriage with their family and a few friends. Harold was taken home just a couple weeks later. Ila endured the year of covid with many hours and days of isolation. But as the virtuous woman, she filled her time with prayer, meditation and phone calls to family and friends. She was even privileged to travel to Francesville for the month of October, 2020 and to Phoenix for 2 months in the Spring of 2021, spending precious moments with family and friends.

Ila was very devoted to her family and considered being a wife, mother, and grandmother as her greatest calling. Ila was a supportive wife to her minister-husband; doing lots of entertaining, encouraging, babysitting, etc. Ila loved to sew, quilt, cook, baking angel food and popcorn cakes and any kind of pie. She also was gifted with gardening especially flowers. Ila made many quilts, blankets and porcelain dolls for family, friends, and World Relief.

Ila was welcomed into her heavenly Father’s arms at the age of 92, on Sunday, July 18, 2021, at the West Wind Village in Morris.

Memorials may be directed to Apostolic Christian Church-North.

To order memorial trees or send flowers to the family in memory of Ila Gramm, please visit our flower store.