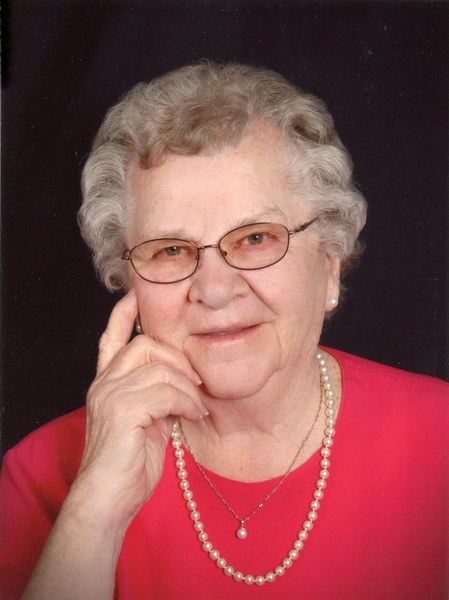 Funeral Services for Ione Lange, of Morris, Minnesota will be held on Monday, September 26, 2016 at 10:30 a.m. at the Christian Reformed Church in Hancock, with Reverend Harrison Newhouse officiating. Visitation will be on Sunday from 5 to 7 p.m. at the Pedersen Funeral Home in Morris and for one hour prior to the service at the church. Burial will be at the Bunde Christian Reformed Cemetery, rural Clara City.

Ione Brouwer, daughter of Koene A. and Jeanette (Peterson) Brouwer, was born on March 14, 1929 in Rhiederland Township near Clara City, Minnesota. Ione was baptized and made Profession of her Faith at Bunde Christian Reformed Church in Clara City. She grew up and attended District 66 country school and later Clara City High School until the 10th grade. Following her schooling, Ione worked at Yocks Grocery Store in Clara City. She completed her nurse's aide training before working as a nursing assistant at the Montevideo Hospital. Ione was united in marriage to Wesley Lange on October 19, 1951 at Bunde Christian Reformed Church in Clara City. The couple farmed in various locations around Montevideo, Clara City, DeGraff and eventually Morris. Ione and Wesley worked side by side raising their family and working on the farm. While farming she held a variety of positions including Fingerhut in Benson, West Wind Village in Morris and baking at Ardell's Eatery in Morris. Ione later retired from work to help care for her husband Wesley. Wesley died May 24, 2002. Ione continued to live on the farm until 2012 when she moved to town, where she lived until the time of her death.

Ione was a member of the Christian Reformed Church in Hancock, where she served as the President, Treasurer, and Secretary of the Ladies' Aide. She was an Adult Leader in 4-H in Swift and Stevens County, a census taker, and a member of the Morris VFW Auxiliary. She enjoyed puzzles, word finds, reading, watching TV and playing bingo, dominoes, board games, and card games(3-13). To order memorial trees or send flowers to the family in memory of Ione Lange, please visit our flower store.