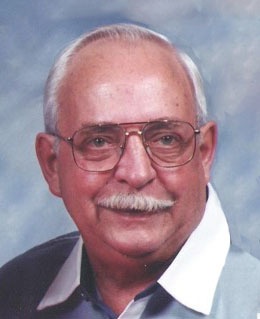 Funeral services for James "Jim" Dickinson will be on Friday, April 14, 2017 at 11:00am at Fron Lutheran Church in Starbuck. A visitation will be on Thursday from 5-7:00 pm at Starbuck Funeral Home. Burial will be at Fort Snelling National Cemetery at a later date.

James Vernon Dickinson was born on December 12, 1932 to Vernon and Ione (Strassburg) Dickinson in Grey Eagle, Minnesota. Jim was baptized on March 26, 1933, at United Brethren Church. He was raised in Grey Eagle where he attended elementary and high school, graduating with the class of 1951. After graduation, he entered into the United States Navy. He was active for four years, making 2 ½ trips around the world and serving during the Korean Conflict. He was honorably discharged on June 13th, 1955. Jim moved to Minneapolis where he was re-united with LaVonne Ida Miller, whom he had met while in high school; they began dating and were married on September 21, 1957 by Rev. Harold Peterson at First Lutheran Church in Sauk Centre, MN. They made their home in South St. Paul and added four children to their family. Jim worked for Northwest Airlines as the Stock Clerk Manager. In 1963, a promotion and transfer moved the family to Michigan for 10 years before moving back to Minnesota, this time in New Hope. He continued his employment with Northwest Airlines until his retirement at age 55, due to his health. In 1998, they settled into Starbuck, Minnesota, where Jim lived until the time of his death.

In his younger years, Jim enjoyed fishing with his father. This led to a life-long love of fishing; he was a good fisherman and a great teacher. They had a place on Mille Lacs Lake where they would spend hours on the lake in their big boat with family and friends fishing. After they had moved to Starbuck, Jim and LaVonne won a pontoon in a raffle put on by the Starbuck Chamber. They enjoyed many days out on the lake. When his children were young, he was an umpire for baseball; he enjoyed watching sports, especially baseball, basketball and football, and he was very proud of his well manicured lawn. Having two children with Cystic Fibrosis, Jim and LaVonne worked closely with the CF Foundation, raising money for research for the disease. Jim was a member of Fron Lutheran Church in Starbuck.

Jim died peacefully, on Saturday, April 8, 2017 at his home in Starbuck. He lived to reach the age of 84 years.

Starbuck Funeral Home in Starbuck is in charge of arrangements. To order memorial trees or send flowers to the family in memory of James Dickinson, please visit our flower store.