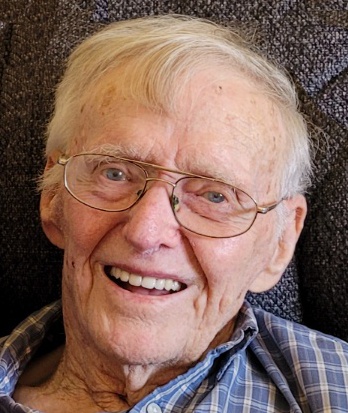 A memorial mass for James “Jim” McNally will be held on Saturday, July 16, 2022, at 2:00 p.m. at St. Mary’s Catholic Church in Chokio. Father John Paul Knopik will be celebrating the mass. A visitation will be one hour prior to the services at the church on Saturday. Burial will be in St. Mary’s Catholic Ceme­tery, rural Chokio.

James Francis McNally, son of Raymond and Caroline (Kaley) McNally, was born on December 2, 1924, in Chokio, Minnesota. He was baptized and confirmed at St. Mary’s Catholic Church in Chokio. Jim died peacefully on Saturday, June 25, 2022, at the Grace Home in Graceville. He was 97 years old.

Jim grew up in rural Chokio and received his education at District 55 country school and graduated from Chokio High School in 1942. In 1943, Jim entered the United States Navy and served in the South Pacific through 1946 on the Battleship USS West Virginia, which was present at many South Pacific battles. After his honorable discharge, Jim moved to Hardin, Montana, where he worked on a farm. It was there that he met Helen Greenwald. The couple were married on September 30, 1946, at Hardin Catholic Church. They made their home in Hardin until 1948, when they moved to Chokio.

Jim farmed and drove school bus until 1961, when he became the Chokio Postmaster; he served in this role until his retirement after 29 years. During retirement, Jim volunteered to help low-income and elderly with their income taxes.

Jim was active in his community and worked with the Chokio Research and Development, the Chokio Commercial Club, as well as other city projects. He and Helen devoted many hours helping to make their community a better place to live. He was a member of the Chokio American Legion, VFW, and DAV, along with organizations and committees within St. Mary’s Catholic Church. Jim also enjoyed hunting, fishing, traveling, and most importantly, spending time with his family.

Spending 97 years on earth, most of it in Chokio, means Jim left an indelible mark on his community and friends. Jim was a great Irish storyteller – whether he was with his family or friends – the stories abounded. When­ever he donated time or was just playing cards with his Thursday afternoon Smear group at Eastside Acres, his sense of humor, generosity and warmth were also present. If Jim was around, there was laughter and kindness.

Pedersen Funeral Home in Morris was in care of arrangements for Jim. To send condolences to the family.

To order memorial trees or send flowers to the family in memory of James McNally, please visit our flower store.
Open