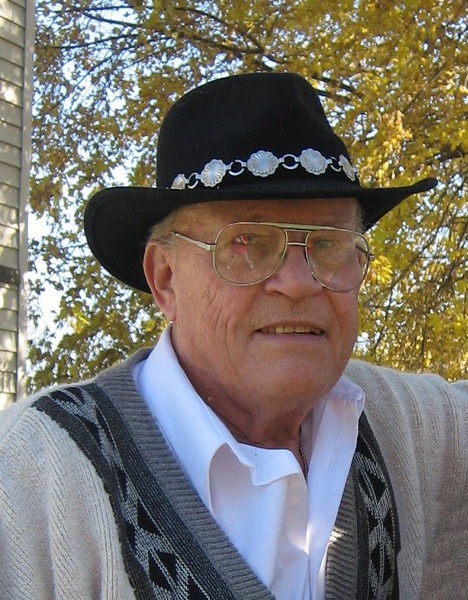 Memorial services for James August Eystad of Donnelly, MN will be held on Friday, December 3, 2021 at 2:00 p.m. at the Good Shepherd Lutheran Church in Morris.  Pastor Michael Hanson will be officiating.  Visitation will be on Thursday, from 5-7:00 p.m. at Good Shepherd Lutheran Church in Morris.  Burial will be at a later date.

James August Eystad, son of August “Gus” and Laura (DeVall) Eystad, was born on October 5, 1934 in Morris, Minnesota. James attended Morris Public School and Colorado Public Schools as well as Alberta High School.  James enlisted in the United States Air Force in February of 1952.  He received an honorable discharge in February of 1956.  While in the Air Force, he married the love of his life, LouElla Ruff on January 17, 1954 in Pittsburg, California.  After serving in the military, James worked at Kaiser Gypsum Company in Antioch, California for 35 years.  He retired on March 29, 1991.   Upon retirement, Lou and Jim moved to Kensington, Minnesota on Red Rock Lake and Donnelly, Minnesota.

James loved to doodle and draw, fish, drive his Kubota and purple golf cart, and work in his flower garden. He contributed many hours of charitable service in Stevens County.   He and his lovely wife were given the Pay It Forward Award in 2014 for their many tireless hours of contributions made to the Morris community.  Lou and Jim worked at the Salvation Army, ARC, Meals on Wheels, St. John’s Church, Good Shepherd Church, NAPS program, and the Morris Sr. Center.  Lou and Jim also liked to make time to stop and visit with anyone.  They made many trips to the nursing home, hospital and hospice in Morris. Jim and Lou very much enjoyed their special Sundays at the lake with Pete and Rita.

James died on Thursday, November 25, 2021 at the Barrett Care Center in Barrett; he was 87 years old.

He is survived by his wife of 67 years, Lou, of Donnelly; brother-in-law, John Ruff of Denison, TX, and four nieces: Debbie (Craig) Gocke, Shawna Ruff, Sheryl Thornton, and Robin (Daniel) Bushman; great-nieces and great-nephews; and great-great-nieces; his special adopted family: Pete and Rita Kaiser and Colleen and Tom Dogotch; and one special granddaughter, Karina Johnson.  He was preceded in death by his parents; two sisters: Shirley Dryden and Betty Eckhart; sister-in-law, Eileen Ruff; and two nephews: Jerry Eckhart and Rick Eckhart.

In lieu of flowers, memorials preferred to Good Shepherd Lutheran Church in Morris.

To order memorial trees or send flowers to the family in memory of James "Jim" Eystad, please visit our flower store.