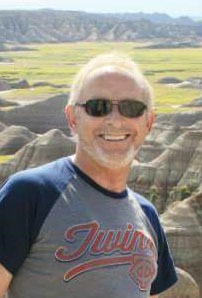 Jeffrey Lynn Banken, son of Raymond and Mildred (Puhl) Banken, was born on May 14, 1952. He grew up in the Chokio-Alberta, Minnesota area and graduated from Chokio-Alberta High School. After his schooling, Jeff farmed with his father and brothers. He was united in marriage to Laural Hurlbut in 1975. The couple made their home in the Morris area and Jeff worked for C.M.I. and Elmer's Distributing. Jeff later moved to Chaska. He married Kim Lebo and worked several jobs in the Chaska area, including Quad Graphics and Manheim Northstar Auto Auction. Jeff most recently made his home in Young America, Minnesota.

Jeff was a "car guy" and he had a love for the Ford Mustang; owning several of them. He enjoyed NASCAR and the NHRA. Jeff traveled to the Indy 500 and to Brainerd, Minnesota for the national drag races. He had a passion for farming, taking any opportunity to get in a tractor and work the ground. Jeff was also an avid fan of Minnesota sports teams.

He will be remembered for being patient, calm and easy going. Jeff always had a love for life; he always kept a positive attitude no matter the situation and lived life in the moment. Anyone who had ever received a hug from Jeff knew he was the greatest hugger. Jeff loved his family! Whether it was taking a road trip to visit his children and grandkids, or attending a family gathering, Jeff was always there.

Under the care of hospice and his children, Jeff died on Tuesday, December 15, 2015 at his daughter's home in Willmar. He was 63 years old.

Family requests memorials are given to the American Cancer Society.