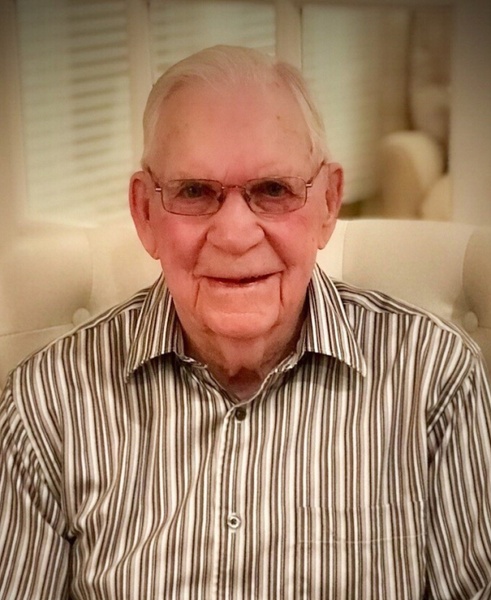 Memorial services for Jerome "Joe" Hoium of Starbuck, Minnesota will be Friday, June 11, 2021 at 2:00 p.m. at Fron Lutheran Church in Starbuck, with Rev. Paul Johnson & Pastor Craig Pederson officiating. Visitation will be Thursday, June 10th, 2021 from 5 to 7 p.m. at the Starbuck Funeral Home in Starbuck and for one hour prior to services at the church on Friday. Burial will be in Fron Lutheran Cemetery, rural Starbuck.

Lawrence Kenneth Jerome ‘Joe’ Hoium was born April 25, 1926 in rural Starbuck, Minnesota to Bennie and Edna (Arneson) Hoium. Even with all those names he was still known as “Sonny” to many relatives as he was growing up. He attended public school in Starbuck until he was drafted in the middle of his Senior Year of High School into the United States Army on January 22, 1945 to serve in WWII. During his school years, Joe was extremely talented in sports. Joe excelled in both basketball and baseball and was a team player both on the court, field and in everyday life. The Starbuck Times wrote an article stating “Joe Hoium will be now turning in his basketball uniform for his military uniform.” His excellence in sports carried over into his time in the military. During his service Joe was stationed in the Philippine Islands and Korea. He was awarded several honors including a Victory Medal, Asiatic Pacific Theater Ribbon, Army of Occupation Medal (Japan), Marksmanship Award, Good Conduct Medal, as well as two Overseas Service Bars. Joe was dedicated to serving his country while overseas, however he never forgot about his family back home. He even went as far as to sell his rations of cigarettes and take on others KP Duty for extra money to send back to his sister who was caring for his Mom who was suffering from Polio. After serving his time working as an Amphibious Tank Driver, Service and Supply Technician, the best Ice Cream Operator, Joe was discharged on December 13, 1946. He returned home with no money as he had sent it all back home for his family and had no HS Diploma. Joe went to work on a farm in rural Starbuck training horses, they called him “The Horse Whisper” and helping with field work. One day the SHS Superintendent came to see if he would consider returning to High School to receive his diploma.  He did indeed return, had a great basketball and baseball season and went on to graduate with the class of 1947. When he walked across the stage to receive his High School Diploma, this hometown hero received a standing ovation.

Joe began working for the Starbuck Creamery and then on to Starbuck Funeral Home & Hardware Store for the next 30 years.  In the early days the hearse and the local ambulance was the same vehicle, so he took the calls for both until 1967 when the Starbuck Ambulance became its own entity.  Joe drove Bus #10 for 40 years and truly enjoyed the all the students over the years and had two generations of families on his bus over the years.

As a Bus Driver he had to stop in the school office for his paycheck and that is where he met the love of his life! On June 29, 1953 Joe was united in marriage to Corrine Olive Hoverud at West Zion Lutheran Church. They built a new home together in Starbuck where Joe resided up until his death.  In June of 1962 they were so excited to adopt a son, Gary. In April of 1964 they receive a call and there was a baby girl ready to be adopted.  Joe & Corrine drove down to Minneapolis the next day to pick up their daughter Karen.  They made wonderful parents and created a very loving home for their children to grow up in.  Joe & Corrine enjoyed their retirement years together traveling and spending most of their time with their family and friends. Their children, grandchildren and great grandchildren brought them life’s greatest joy!

Joe loved his hometown of Starbuck and one would frequently find him volunteering.  He was a dedicated member of the local Fire Department for 25 years and was also active in the VFW, Lions Club, Member of the World’s Largest Lefse Team for the Guinness Book of Records, Depot Society, Boy Scouts, Project Starbuck, as well as several other community and church groups.  Joe and Corrine attended almost every sporting and community event.  They were truly part of the fabric of the community of Starbuck and were so honored to be Grand Marshalls in the Starbuck Heritage Days Parade as a tribute to their service to the community.

In his spare time Joe loved attending events for his children & grandchildren, golfing, playing softball for the Starbuck Town Team and basketball in the driveway, waltzing, bowling, doing yard work, hugging, visiting with neighbors, camping, snowmobiling, woodworking, helping Gary and Karen among others with their home projects, Sunday visits with his siblings and of course, watching the Minnesota Twins.  He had a special surprise while in the hospital this Memorial Day, Bert Blyleven former Minnesota Twins Player called him to thank him for his service during World War II and for being such an avid Twins Fan.

Joe was a very resilient and determined man! He was actually struck by lightning twice and survived. In 2001, he was given a cancer diagnosis with 3-6 months to live.  He decided to stop all treatments and live each day to the fullest in prayer and faith.  His cancer just disappeared and his physician told him it was not medically possible and the only explanation was that it truly was a miracle from above. Joe lived a full life and stayed very active up right up until the end. He was so determined to live and be strong that he was actually doing push-ups only 2 months ago. Joe golfed weekly with his friends until the age of 92. He remained in his own home, was driving, shopping, and enjoying time with his family whom he loved dearly.  Some of his greatest virtues were his kind, humble, caring and gentle ways!

Joe passed away peacefully with Corrine, Gary & Karen by his side on Tuesday, June 1, 2021 at the Glacial Ridge Hospital in Glenwood. He was 95 years old.

He is preceded in death by his parents; brothers: Wally and Ernie Hoium; sister: Evelyn Olson; as well as his brothers-in-law and sisters-in-law.

There will be a live stream of Joe's service starting at 2:00 p.m. on Friday, June 11, 2021.  The Starbuck Funeral Home in Starbuck is in charge of the arrangements and to view the service on their website at www.starbuckfh.com, scroll to the bottom of Joe's page and click the link.

Blessed be the memory of this very special man!

To order memorial trees or send flowers to the family in memory of Jerome "Joe" Hoium, please visit our flower store.