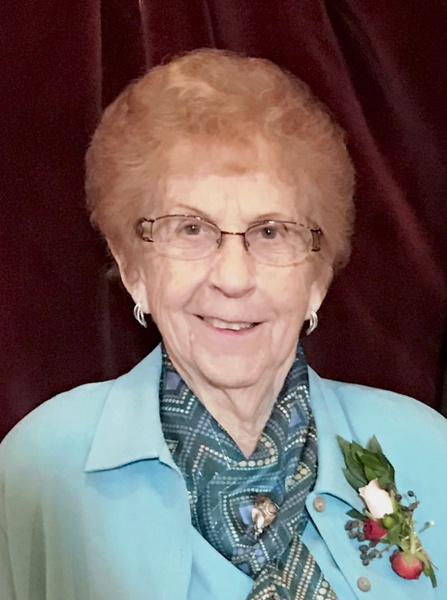 The funeral for Joan Bruer, of Morris, Minnesota will be held on Sunday, January 28, 2018 at 2:00 p.m. at Good Shepherd Lutheran Church in Morris, with Reverend Michael Hanson officiating. Visitation will be on Saturday, at Pedersen Funeral Home in Morris from 10:00 a.m. to 12:00 noon, and Sunday, one hour prior to the service at the church. Burial will be at the Reque “Frog Lake” Cemetery, rural Alberta, Minnesota.

“I love you to pieces” was the expression of love from our wife, mother, grandmother, and GG (great grand mother), Joan Phylis Bruer. Her never failing love for her family, friends, and Savior was evident in her daily life. We have been blessed to have been part of it.

Joan Bruer was born to Carl and Clara Bauman on May 28, 1934 near White Rock, South Dakota. She was one of 11 children. She was baptized in her parent’s home when she was five years old and remembered the day it happened. She later confirmed her faith at Bethel Lutheran Church in Herman. She was a faithful servant of Jesus Christ her entire life and openly shared her love for Jesus with anyone who asked. After her marriage, Joan was very active in the Trinity Lutheran Church in Alberta. She taught Sunday school, Bible School, and Release Time for many years. In 2011, Joan and Myron joined Good Shepherd Lutheran Church in Morris.

Her elementary education began in District 52 in Traverse County. Many days, she and her siblings, walked about 1.5 miles to school. When she was in fourth grade, her family moved to a farm west of Herman. She graduated from country school and moved to West Central School of Agriculture.  She graduated in 1952. After graduating, she worked for Dr. Jorgenson, dentist in Morris for 2 years. She then went to Swedish Hospital in Minneapolis where she earned her license in Practical Nursing. She worked in the Morris Hospital for 24 years.

On August 20, 1955, she married Myron Bruer. They farmed together over 50 years. Four children were raised on the farm. In 2013, they moved to Morris. They loved to travel and visited many places around the world. They also spent 15 winters in Arizona with many wonderful friends. Joan loved to fish and play the piano. She also loved Christmas. It was one of her favorite times because all of the family was together. Her greatest joy was her family!

Joan died on Saturday, January 20, 2018 at her home in Morris, surrounded by her family and under the care of Knute Nelson Hospice.  She was 83 years old.

Joan is survived by her husband: Myron, Morris, MN, and children: Randy (Kristi) of Fisher, MN, Steven (Jane) of Detroit Lakes, MN, Maria (Tim) Regnier of Hawley, MN, and Connie (Joel) Maier of Brooklyn Park, MN. She had 11 grandchildren and 3 great-grandchildren. She is also survived by three sisters: Rose Olson of Columbus, IN, Betty Carpenter of Bremerton, WA, and Joyce Gimmestad of Roseville, MN; one brother, Dick Bauman of Fargo, ND, as well as many nieces and nephews. You are missed. We love you to pieces!

To order memorial trees or send flowers to the family in memory of Joan Bruer, please visit our flower store.