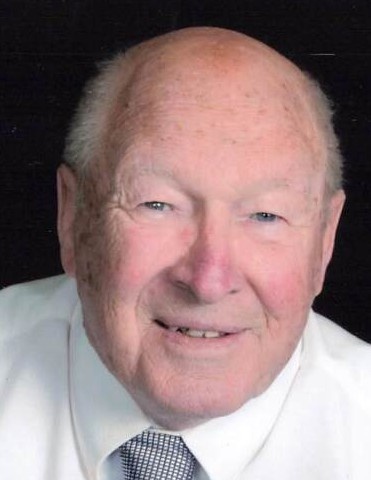 Carroll John Larson was born on October 16, 1936 in Morris, Minnesota to Gunard and Katherine (MacIver) Larson.  John was baptized on November 17, 1936 at St. Petri Lutheran Church in Cyrus by Pastor Sverre Torgerson and was confirmed on November 25, 1951 by Pastor A.H. Sevig.  He attended grade school in Cyrus, graduating on May 12, 1955 from Cyrus High School. While in school, he was active in football and basketball and was the captain of both teams his junior and senior years. Following high school, John was united in marriage to his high school sweetheart, Darlene Jordan on January 20, 1956.  The newlyweds first home was an apartment in Morris.  Then they moved into a house in Cyrus where they welcomed their four children.  In 1968, they bought and made their home on a farm near Cyrus.  John worked several jobs, including: going down south combining for Walter Boettcher, farming with his father, six years at the lumberyard, serving as custodian and school bus driver for Cyrus schools, and his favorite – farming.  John milked cows and raised pigs. Later in life, he loved helping his son, Danny, on the farm.  John could often be found in the field, on a John Deere tractor or combine. In the early 80’s, John and Darlene purchased lake property on Lake Belle Taine near Nevis, Minnesota, they enjoyed this as a family vacation spot until they moved there permanently in 2015.

John was a charter member of Bethel Lutheran Church in Morris.  John and Darlene enjoyed wintering in Apache Junction, Arizona for 24 years. Here John explored his love of hiking and rock collecting on the many trails and mountains, including Superstition Mountain, which he climbed three times! They shared a love of travel which brought them twice to Hawaii, Scotland,  bus trips to New England and down the coast of California and an eight-week 5th wheel adventure to Alaska.  John was the type who could fix or build anything – from a cab for his tractor to a pontoon for his family to enjoy. He made wooden toys and furniture.  John loved collecting rocks and enjoyed his collection of John Deere toys, which the grandchildren would really like to play with!  He liked hunting, fishing, and pumpkin pie, especially when it was shared with family at a picnic in the bean field.

John cherished the family that he and Darlene created, and was always willing to play with, and tease, his grandchildren and great-grandchildren.  In the summers, he and Darlene would welcome them to the lake for weeklong vacations.  Yearly, Grandpa John would play the role of Santa Claus for his grandkids and later the great-grandkids.  He would ‘blow up his muscles’ for them to see and tickle them with the riddle – ‘here comes the mousy from the barn to the housy’ – always looking forward to the giggles of the children.

Most importantly, John wanted everyone to know the Lord.  He had a strong faith foundation and  shared it.  He taught his children, grandchildren and great-grandchildren to pray.  He would often be seen with his hands folded on his tummy, fingers interlocked, twiddling his thumbs, talking to God. If there was a man who deserved Heaven, it was John.

John died on Saturday, July 3, 2021 at Abbott Northwestern Hospital in Minneapolis.  He was 84 years old.

Pedersen Funeral Home in Morris is in care of arrangements for John.

To order memorial trees or send flowers to the family in memory of John Larson, please visit our flower store.