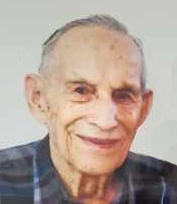 A private family and extended Lindor/Hopkins families Celebration of Life service for Ken Lindor, formerly of Cyrus, Minnesota, will be held in Morris and will include Military Honors at a graveside service at Scandia East Cemetery. A livestream of Ken’s service will be available to watch beginning at 11:00 a.m. on Thursday, July 22, 2021, on the Pedersen Funeral Home website; scroll to the bottom of Ken’s obituary for the link.

Kenneth Vernon Lindor was born on March 21, 1923, at home on the Lindor Farm in Nora Township, rural Pope County, Minnesota. He was the fourth of eight children born to Elizabeth (Klabunde) and Albin “AW” Lindor. Ken was baptized into the Christian faith at First Lutheran Church in Kensington. He attended rural schools, graduating with the Kensington High School class of 1942. While in school, he excelled in baseball and basketball.

Ken served his beloved country during World War II as a sergeant and as a squad leader in the US Army Infantry’s 3rd Division. He participated on the basketball, softball, and boxing teams when they were not on duty while in Austria, Germany, France, and Belgium. He returned home to farming five miles north of Cyrus. Ken married Dorothy Joan Hopkins at the Villard Methodist Church on August 28, 1948. Dorothy and Kenny raised five children and spent nearly 60 married years together.

Kenny was a big sports enthusiast, whether it be playing in the lawn with kids, watching relatives, cheering for the Minnesota Twins, or playing in the town team state tournament several times in the early 50s. One year, the Kensington outfield consisted of Les, Don, and Ken Lindor. Ken also loved listening to a wide variety of music and dancing, which he loved to do with Dorothy.

Loyal, honest, and dedicated describe Kenny Lindor. He enjoyed being a dad, grandpa, and great-grandpa, and he always put family first. Ken was the primary caregiver for Dorothy at their home for a decade before she moved into West Wind Village. With the exception of surgeries and recoveries, Ken drove to Morris every day to spend time with Dorothy until she passed away in August of 2007. Following her death, he continued to visit those in care centers and assisted livings.

Pedersen Funeral Home in Morris is in care of arrangements for Kenny.

The family of Ken Lindor wants to thank you for joining the virtual service celebrating the life of our beloved father, grandfather, great-grandfather, brother, uncle, father-in-law, brother-in-law and friend.

In his life of 98 years this incredible man made many friends and acquaintances. Kenny also has a large extended family who loved him as much as Kenny loved them.

Although we know it’s disappointing to his many friends, we found it necessary to limit the church attendance to family. For that we are sorry, but we have a number of family who have health and immunity issues and with the spike in Covid-19 and the variants, it’s still a real concern.

Kenny wanted to do whatever he could to join the fight against the pandemic to help protect the safety of family, friends, and community.

Please know that whether you were a life-long friend or a more recent one, Kenny valued you and appreciated your presence in his Life. God Bless every one of you!

Blessed be the memory of Kenneth V. Lindor

To order memorial trees or send flowers to the family in memory of Kenneth Lindor, please visit our flower store.