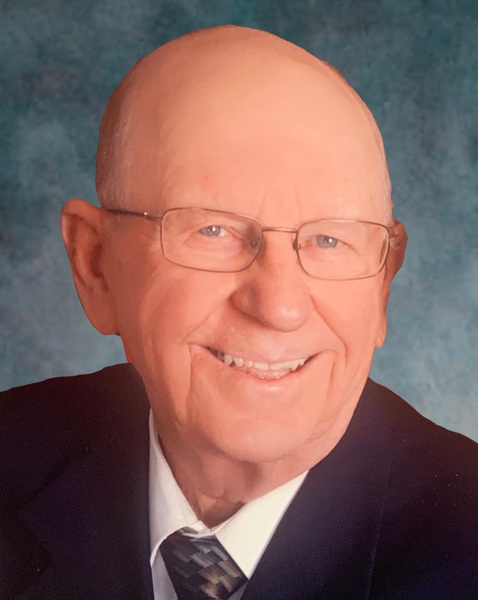 Leforest (Lee) Groff passed away on Sept. 29, 2021, after a two-year battle with MDS and leukemia.  Services will be held Monday, Oct. 4, 2021, beginning with visitation at 12:30 p.m., followed by a celebration of life at 2 p.m., both at Trinity Lutheran Church, Alberta, Minn. Burial will be at Summit Cemetery in Morris. In honor of his beloved wife Darlene and in memory of Lee, the family asks that masks be worn.

Lee was born on March 2, 1934, in Sundown Township, Redwood County, Minn., to Nels and Thea Groff.  He graduated from school in Milroy, Minn., where he was a trumpet player and a varsity wrestler.  Near the end of his high school years, he met and fell in love with Darlene Tubbs and they were married on July 8, 1953.  In that same year, Lee and Darlene moved to the farm in rural Alberta where they lived happily together for 68 years.

A lifelong farmer, Lee took pride in his farming operations.  The entire family was involved in field work from planting through harvest.  Livestock operations were also a part of farm life, including milk cows, feeder cattle and pigs. Lee was involved in rural organizations and served as a board member for both Agralite Electric Cooperative and CVEC (Chippewa Valley Ethanol Company).

Lee believed in God and was an active member of Trinity Lutheran Church in Alberta for 68 years.  He served in numerous leadership capacities at Trinity, including multiple stints as council president.  When the children were young, all seven of them would be dressed in their Sunday best and marched to a pew close to the front of the church, where they were expected to be on their best behavior – or else.  In later years, Lee enjoyed carrying candy in his jacket pocket to share with all the children at Trinity.

Arrangements have been made with Pedersen Funeral Home in Morris, Minn.

To order memorial trees or send flowers to the family in memory of Lee Groff, please visit our flower store.