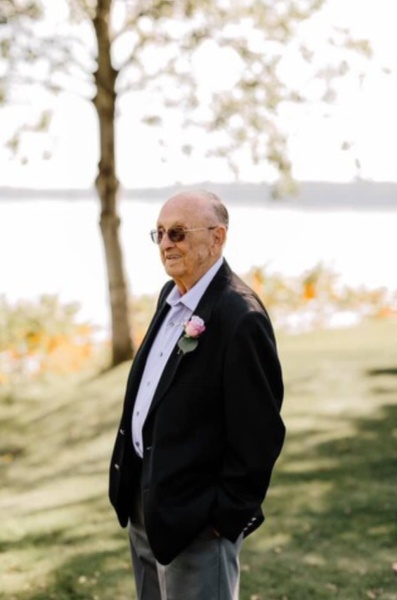 There will be a private family graveside service and when the Covid situation allows a Celebration of Life service will be held at Resurrection Lutheran Church in Monticello, MN.

Leon Lester Sloneker concluded the final chapter of his life on earth on January 9, 2021 at the age of 98.

He was born on September 20, 1922 in Horton Township, Stevens County, Minnesota to Will and Alma (Weidler) Sloneker.  He attended the local country school through 8th grade and completed his high school education at the West Central School of Agriculture in Morris, Mn. On April 30, 1946 he was united in marriage to Dorothy Patricia Fern Bush. They farmed near Cyrus for a number of years and moved into Cyrus in 1964. Leon worked as a Soil Scientist Technician at the Agricultural Research Center in Morris until his retirement. He was active in the community serving on the Cyrus School Board, the Cyrus Fire Department and Trinity Lutheran Church.

Leon loved the outdoors and hunting and fishing and playing cards. He was a great dancer and was still gracing the dance floor until his stroke in 2019. He will be greatly missed by his family, but he leaves us a legacy of strong faith in God, loyalty, integrity, compassion and knowing the value of hard work and a good glass of wine. He was a very fun guy! His daughter Kara summed it up well. “Heaven gained another devoted soul. It’s about to get a bit rowdier up there as the cards are being shuffled in anticipation and the dance floor is being cleared!”

To order memorial trees or send flowers to the family in memory of Leon Sloneker, please visit our flower store.