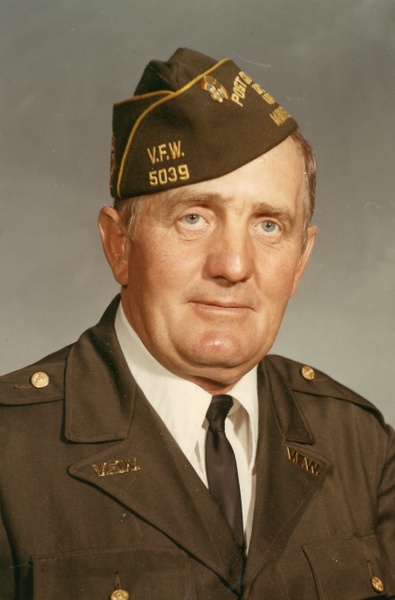 Funeral services for Leslie "Les" Nelson of Morris, MN will be Saturday, April 8, 2017 at 2:00 p.m. at Faith Lutheran Church in Morris, with Reverend Dell Sanderson officiating. Visitation will be Saturday from 12:30 to 2:00 p.m. at the church. Burial will be in Summit Cemetery in Morris. Military rites provided by the Morris American Legion, V.F.W. and AmVets.

Leslie Alfred Nelson was the 3rd of 12 children born to Chris and Rose (Henriksen) Nelson. As Les often recited, he was born on the family farm on June 28, 1920, 11 o'clock in the forenoon, in Pepperton Township, Stevens County, Minnesota, delivered by Dr.Kane, assisted by Les' aunt, Emma Ernst. Les was raised in the Alberta/Donnelly area, where he attended country schools until the 8th grade. As a young man, Les worked as a farmer, drove truck and worked at the Donnelly Hatchery.

On Friday, March 13, 1942, Les was one of 13 young draftees from Stevens County, who left Morris for Fort Snelling for induction into the U.S. Army. Les spent time at Camp Cook; Lompoc, CA; Camp White, OR; and Warner Robbins Air Depot, Macon, GA. In the military, Les trained as a mechanic and also served as an MP directing air traffic. He served in the Pacific Theater including New Guinea, the Dutch East Indies and the Philippines. He was honorably discharged on December 4, 1945.

Les then returned from WWII to farm with his family. On January 1, 1948, he was united in marriage to Selma Akre. Following their marriage, the couple farmed north of Chokio, then moved to Pepperton Township, and finally to their farm south of Alberta in 1965. Les was baptized and confirmed at Peace Lutheran Church and he also attended West Central School of Agriculture. Les and Selma remained on the farm until 2013, when they moved to Morris.

Les was a member of Peace Lutheran Church which later became Faith Lutheran Church. He served on the church council and ushered for many years. Les was part of the volunteer group that built the church at its current location. He was a 72 year member of the American Legion. He served in several capacities including post commander of the V.F.W. He was a member of the Sons of Norway and Heart to Heart. In 1988, Stevens County Pheasants Forever honored him with the Ernest Strubbe Award for conservation. Les planted food plots and CRP acres for the wildlife. He enjoyed farming, fishing, dancing on Saturday nights, mechanical work and woodworking. He especially enjoyed spending time with his family.

To order memorial trees or send flowers to the family in memory of Leslie Nelson, please visit our flower store.