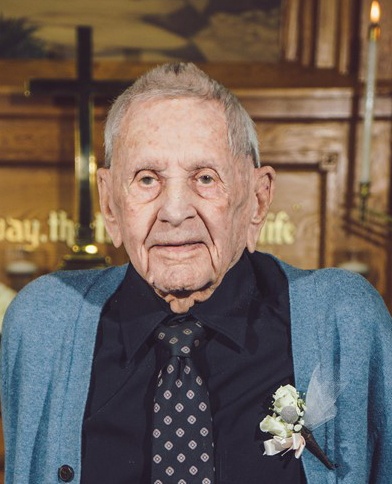 The memorial service for Lloyd Hoyer, of Morris, Minnesota will be held on Monday, July 15, 2019 at 10:30 a.m. at the Trinity Lutheran Church in Cyrus, with Reverend Chris Richards officiating. Visitation will be on Monday, one hour prior to services at the church. Burial will be at the Calvary Cemetery, in Morris. Military Rites will be provided by the Morris American Legion, V.F.W., and AmVets.

Lloyd Harold Hoyer, son of Louis and Melanie (Bach) Hoyer was born on May 8, 1919 in Pepperton Township, near Alberta, Minnesota. He grew up in the Alberta area, graduating from Alberta High School. After his schooling, Lloyd joined the Army National Guard, and was deployed into the U.S. Army during World War II. After being honorably discharged, he returned to Morris, Minnesota and began working. He was united in marriage to Arlene Lauer on February 23, 1943 at the Assumption Church Parish House, in Morris. The couple made their home in Morris, where Lloyd was employed by Bell Telephone until his retirement in 1982. Arlene died on January 16, 2005. Lloyd continued to live in his own apartment and on his own terms until the time of his death.

He was an active member of the Morris American Legion, V.F.W. Club, and was a life member of the 9F Sportsman’s Club. Lloyd spent many hours hunting and fishing, he loved camping, and spending time at his seasonal cabin at 10 Mile Lake. He will be remembered for being a caring father, grandfather, and having a love for life. Lloyd cherished spending time with his family and the taste of a cold beer.

Lloyd died on Wednesday, July 10, 2019, with his daughter at his side, at the Stevens Community Medical Center in Morris. He was 100 years old.

In lieu of flowers, the family requests memorials are given to the Courage Cottage or charity of your choice.

Pedersen Funeral Home in Morris is in care of the memorial services.

To order memorial trees or send flowers to the family in memory of Lloyd Hoyer, please visit our flower store.