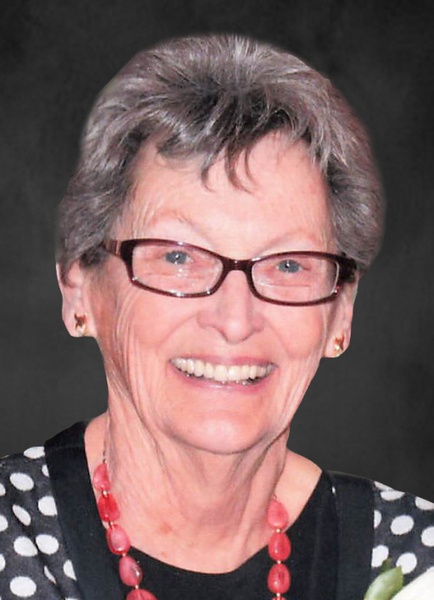 Lois Ann Steffen was born on February 12, 1939 in Springfield, Brown County, Minnesota to Arnold and Elaine (Juhnke) Steffen.  She was raised on the family farm in Sanborn, Minnesota where she received her education until the 8th grade at Zion Lutheran Church and then Sanborn High School, graduating with the class of 1957.  Following her schooling, Lois moved to Minneapolis to work for Northwestern Bell Phone Company.  While in Minneapolis, her two roommates set her up on a blind date with Maynard Stadsvold.  The two began dating and were married on June 6, 1959, at Zion Lutheran Church in Sanborn.  Following their marriage, they moved to Starbuck, Minnesota where they farmed northwest of Starbuck.  They started their family, welcoming four children: Kim, Ann, Heidi, and Steffen.  Lois farmed along side Maynard, his father, Oliver, and Steffen.  They lived on the farm until the late 90’s when they moved to the south side of Lake Minnewaska in Starbuck.  Maynard preceded Lois in death in 2004, she continued to live at that home on the Lake until moving to the west side of Lake Minnewaska in 2016.  She remained there until the time of her death.

After her children were graduated from high school and off on their own, Lois completed coursework for her CNA and went to work at Lakeview in Glenwood and then Minnewaska Lutheran Home in Starbuck.  After a time, she changed positions at the Minnewaska Lutheran Home and was in the Activities Department.   Lois had wanted to be a nurse, but having not reached that, she was content working at the nursing home in different capacities.  After her retirement, Lois continued to volunteer at the nursing home until recently.

Lois was a member of Fron Lutheran Church in Starbuck and was active in the Ladie’s Aide.  She was also a member of the Minnewaska Lutheran Home Auxiliary.  She enjoyed spending time reading, feeding the birds, embroidering - even making quilts for each of her grandchildren and great-grandchildren, going for rides, checking on cattle, and raising chickens, especially seeing them run around the yard.  Lois was “famous” for baking her pies and her favorite to eat was sour cream raisin.  She loved and looked forward to her annual sister’s get togethers and was pleased to have hosted the last one in October of 2021.  Lois cherished the time that she was able to spend with her family, She and Maynard and their kids traveled extensively, they took their four children to all 50 states!  They believed that the best way to learn about geography was to be in it.  In addition to the states, Lois visited numerous foreign countries, continents, and Caribbean islands.  She loved hosting her family at her home, especially the grandkids and great-grandkids who would lovingly refer to the lake as “Grandma’s Ocean.”  They made many memories there and while going on golf cart rides.   Lois was proud of her growing family, this summer of 2022, she was set to be a great-grandma two more times!

Lois died on Tuesday, January 18, 2022, at the Alomere Health in Alexandria, Minnesota; she was 82 years old.

Starbuck Funeral Home in Starbuck is in care of arrangements for Lois.

To order memorial trees or send flowers to the family in memory of Lois Stadsvold, please visit our flower store.