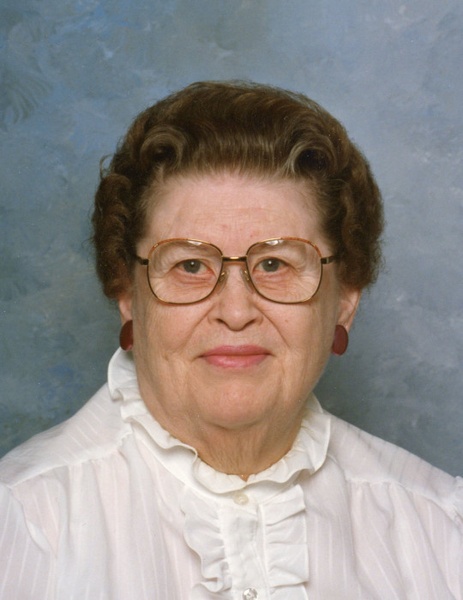 Lucille Kathrine (Berg) Carlson, daughter of Louis and Kaija (Thorson) Berg, was born August 30, 1926, Hoff Township, Pope County, and baptized at West Zion Lutheran Church, Hancock, MN by Pastor K.R. Palmer September 19, 1926. Lucille shared stories of several tornadoes forcing the family to move several times and eventually to Starbuck.  She attended several country schools.  She was confirmed at Fron Lutheran Church March 17, 1940 by Pastor M. Casper Johnshoy.  Her public education ended early as she stayed home to help and care for her mother.  Lucille was an only child and lost both her parents at a young age.

Lucille lived in Minneapolis most of her adult life and lived with a family as a housekeeper and child care worker, worked as a waitress, and was also a licensed child care provider. Lucille was united in marriage to Donald Carlson in 1965 with whom she enjoyed vacation trips and camping. She was widowed after ten years. Later she enjoyed day bus trips to various events and scenic areas.  She also talked about attending Native American celebrations in her neighborhood to which she was invited.

Lucille moved back to Starbuck and her Norwegian “roots” in 2001 enjoying Lefse Dagen and the various community events.  She again became a member of Fron Lutheran Church and joined the Minnewaska Lutheran Home Auxiliary.  She appreciated being included in holiday and various family gatherings on both sides of her family.

Lucille died Monday, September 25, 2017 at the age of 91 at the Minnewaska Lutheran Home, Starbuck, MN.  It was Lucille’s decision to not have a funeral services.  There will be a private burial service at Fort Snelling National Cemetery in Minneapolis.  Lucille is survived by several cousins and preceded in death by her husband; parents and one infant sister.

To order memorial trees or send flowers to the family in memory of Lucille Carlson, please visit our flower store.