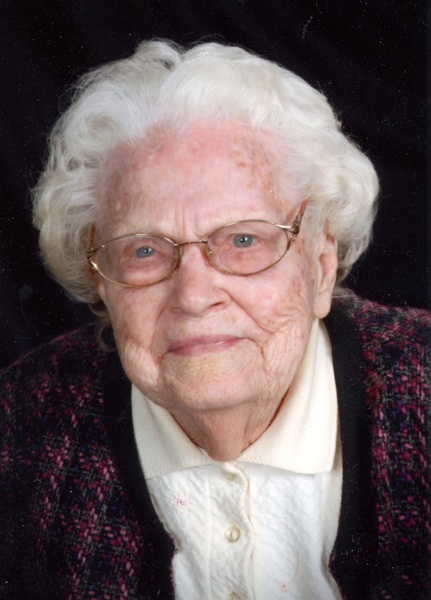 Memorial services for Lucille Melberg of Morris, MN, formerly of Chokio, will be held Saturday, February 24, 2018 at 2:00 p.m. at Our Savior's Lutheran Church in Chokio, MN, with Pastor Gloria Anderson officiating. Visitation will be Friday from 4 to 7 p.m. at the Pedersen Funeral Home in Morris and for one hour prior to services at the church on Saturday. A private family burial will be at a later date in Summit Cemetery in Morris.

Lucille Marie Christensen, daughter of Chris and Hanna (Wilson) Christensen, was born March 4, 1921 in Eldorado Township, Stevens County, Minnesota. She grew up on the family farm near Chokio, where she attended country school. Following her schooling, she helped on the farm and worked for other families, assisting with cooking and cleaning. Lucille met Earl Melberg while he worked on the farm for her father. They were united in marriage on November 30, 1944 in Morris. The couple made their home on a farm near Chokio, where Earl farmed and they raised their three children. Lucille helped on the farm until 1978, when she began working with her son, Chris at Morris Floral in Morris. When Earl died in 1987, Lucille remained on the farm for a few years, before moving into Morris. She continued to help Chris until she was 92 years old, when she moved to West Wind Village in Morris.

Lucille was a member of Our Savior’s Lutheran Church in Chokio, where she served on the ladies aide. She enjoyed gardening, fishing, bowling, playing cards, needle work and working alongside Earl on the farm. She especially enjoyed spending time with her family.

To order memorial trees or send flowers to the family in memory of Lucille Melberg, please visit our flower store.