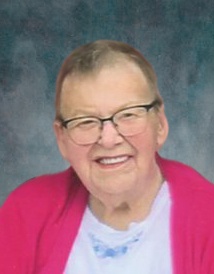 Funeral services for Luella Peterson of Morris, will be held on Wednesday, July 28, 2021 at 2:00 p.m. at Our Savior’s Lutheran Church in Chokio with Reverend Erik Rundquist officiating.  Visitation will be one hour prior to the service at the church and burial will be at Chokio Lutheran Cemetery.

Luella Mae Whitmer, daughter of Walter and Clara (Bruhn) Whitmer, was born May 14, 1933 on a farm near Hancock.  She grew up and attended country school, and later graduated from Graceville High School.  After graduation, Luella worked for North Central Airline of Chicago in airline communications.  Several years later, she moved back to the Chokio area.  She was united in marriage to Floyd “Sonny” Peterson on June 18, 1958.  Luella had three children from a previous marriage and to this union three children were born.  The couple made their home in Morris until 1964, when they moved to Chokio.  In 1969, Luella went to work for The Review in the circulation department.  In addition to her circulation work, Luella also wrote many featured stories.  One of her stories was picked up by KCMT television of Alexandria.  Sonny passed away May 18, 2003.  Luella later moved to Morris where she continued to live until the time of her death.

Luella was a member of Our Savior’s Lutheran Church in Chokio.  She was the head of the resident council at West Wind Village as well as the reigning queen.  Luella enjoyed writing – especially poetry, reading, coloring, computer games and spending time with her family, friends and her special grandchildren.

Pedersen Funeral Home in Morris is in charge of the arrangements for Luella.

To order memorial trees or send flowers to the family in memory of Luella Peterson, please visit our flower store.