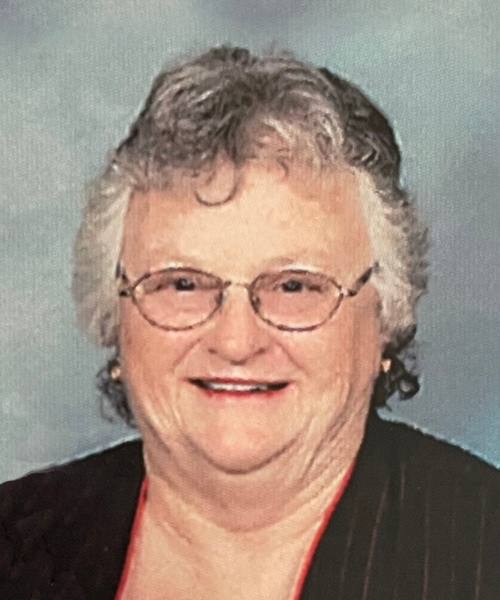 Funeral services for Madonna “Donna” Larson, of Chokio, Minnesota, will be held on Tuesday, August 17, 2021 at 10:00 a.m. at St. Mary’s Catholic Church in Chokio, Minnesota.  Celebrant for the service will be Father John Paul Knopik.  Visitation will be on Monday at Pedersen Funeral Home in Morris, Minnesota from 5:00 to 7:00 p.m. with a prayer service and time of sharing beginning at 7:00 p.m. Burial will be at St. Mary’s Catholic Cemetery, near Chokio.

While masks are not required, it is recommended that masks be worn for those who are not vaccinated for the protection of our families and communities.

Madonna (Foley) Larson, was the third of four children born to Milton and Alice (Bahnsen) Foley, on August 7, 1938 at Stevens County Hospital in Morris.  She was baptized and confirmed her faith at Assumption Catholic Church in Morris.  Donna was raised on a farm south of Alberta where she attended public school.  In the fifth grade Donna became acquainted with the new kid in town, Russell Clarence Larson. The two were quickly smitten and courted all through school, both graduating from Alberta High School in 1956.  During her summers off from school, Donna worked at a dental office.  On November 14, 1956, Russell and Donna were married at Assumption Catholic Church in Morris.  They made their home on the farmstead of Russell’s parent’s – it was a one-bedroom house with no indoor plumbing.  This is where they started their family, they welcomed their first two daughters before they made their move to a farm south of Chokio in the winter of 1959.  They added to their family with three more daughters and two sons – all within ten years! After their move, Donna stayed home to raise their children, tend to her one-acre garden and to help Russell with the family farm.  She wasn’t a typical housewife, Donna, and all of their children, helped with the farm.  She could often be seen driving a tractor working the fields or picking rock.  She made a hot breakfast for her family every morning and could be heard telling her children to “put your work clothes on” as soon as they were off the bus.  In addition to the farm work, Donna raised over 1500 chickens a year.

Donna was a very active member of St. Mary’s Catholic Church in Chokio.  She had a strong dedication to the church and was involved in the ladies’ guild, serving for many funerals, she was part of the Wednesday craft group and made hundreds of things for the annual bazaar over the years.  She was an important part of designing the current fellowship area of the church as well.  In her free time, Donna enjoyed golfing with her husband as well as bowling on a local women’s league.  Donna was a hard worker and did everything she was a part of with her whole heart.  She was an excellent cook, always had dinner on the table for her family, and passed down her cooking skills to her children.  She made fabulous fried chicken, homemade bread, and desserts.  Most notable were her pancakes, which she would always prepare for her grandchildren.

In 2010, Russell and Donna moved off of the farm and into Chokio.  She continued to create crafts for the annual church bazaar and committed to anything that required her attention.  Donna cherished the time that was spent with her family, cooking, doing any project or going on any trip.  She radiated her love through her actions and spoiled her grandchildren rotten.  She enjoyed reminiscing about small memories with the family she and Russell created.  Donna was a remarkable wife, mother, grandmother and friend who will be missed by many.

Donna died peacefully on Friday, August 13, 2021 at the West Wind Village in Morris, having lived to reach the age of 83 years.

In lieu of flowers, memorials are preferred to the American Cancer Society or the American Diabetes Association.

Pedersen Funeral Home in Morris is in care of arrangements for Donna.

To order memorial trees or send flowers to the family in memory of Madonna "Donna" Larson, please visit our flower store.