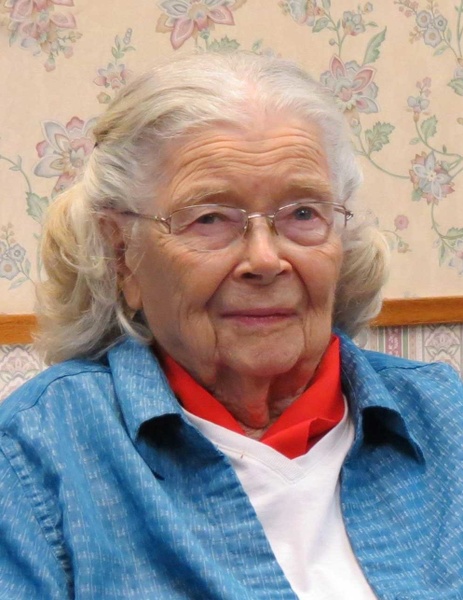 Funeral services for Marguerite Griffith of Morris, MN will be held Tuesday, May 24, 2016 at 10:30 a.m. at Assumption Catholic Church in Morris, with Father Robert Kieffer officiating. Visitation will be held Monday from 5 to 8 p.m., with a rosary at 4:30 p.m. and a prayer service at 7:30 p.m. at the Pedersen Funeral Home in Morris and for one hour prior to services at the church on Tuesday. Burial will be in Calvary Cemetery in Morris.

Marguerite Selma Moe, daughter of Martin and Selma (Pearson) Moe, was born on December 2, 1921 on the family farm near Montevideo, MN. She was confirmed at Siloah Lutheran Church in Parnell Township. Marguerite attended country school in Parnell Township until the 8th grade and later graduated from Graceville Public High School in 1940. Marguerite continued her education at Minneapolis Business College earning a Business Degree. Following her schooling, she worked at Central Exchange in St. Paul and later moved to Graceville where she worked for Dr. Oliver's Medical Practice. She was united in marriage to Jim Griffith on June 22, 1946 at Holy Rosary Catholic Church in Graceville. The couple made their home in Graceville until 1950 when they moved to their farm in Darnen Township where the couple raised their family. In February of 2013, Marguerite became a resident of West Wind Village in Morris, MN. She continued to live there until the time of her death.

Marguerite was a member of Assumption Catholic Church, Christian Mothers, St. Michaels Mission Group and the Morris VFW Auxiliary. She enjoyed cooking, especially homemade bread and caramel rolls on Saturdays, crocheting Afghans for her grandchildren and great-grandchildren and visiting with family and friends whenever possible.

Marguerite died on Thursday, May 19, 2016 at the age of 94 at the Stevens Community Medical Center in Morris.

To order memorial trees or send flowers to the family in memory of Marguerite Griffith, please visit our flower store.