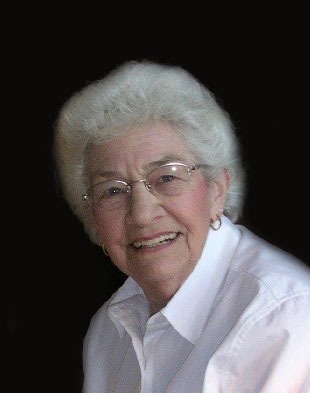 A memorial service for Marguerite Neuenfeldt of Starbuck, Minnesota, will be held Saturday, March 25, 2017 at 11:00 a.m. at Fron Lutheran Church in Starbuck. Revered Paul Johnson will be officiating. Visitation will be held one hour prior to the service at the church on Saturday. Burial will be held Monday, March 27, 2017 at 11:35 a.m. at Fort Snelling National Cemetery in Minneapolis, MN.

Marguerite Jane Effinger, daughter of Jack and Christine (Loretz) Effinger, was born March 21, 1922 in St. Paul, Minnesota. She grew up and attended school in St. Paul graduating from Wilson High School in 1940. She was united in marriage to William Neuenfeldt on December 29, 1943 in St. Paul. The couple made their home in many places including Texarkana, TX, Wausau, WI, Bryan, OH, Wheaton, IL, and Eden Prairie, MN. The couple later retired and moved to Starbuck, Minnesota where she continued to live until the time of her death.

Marguerite enjoyed playing golf, bridge and quilting. Most of all, she enjoyed spending time with her friends and family.

Marguerite died Monday, March 20, 2017 at the Minnewaska Lutheran Home in Starbuck, MN. One day short of her 95th birthday.

She is survived by three children: John (Jane) Neuenfeldt of Maple Grove, Jean (Kurt) Helm of Moorpark, CA and Bill Neuenfeldt of Ft. Smith, AR; two grandsons: Ryan Neuenfeldt of Portland, OR and Karl Neuenfeldt of San Diego, CA. She was preceded in death by her husband Bill in 1992, as well as seven brothers and sisters. To order memorial trees or send flowers to the family in memory of Marguerite Neuenfeldt, please visit our flower store.