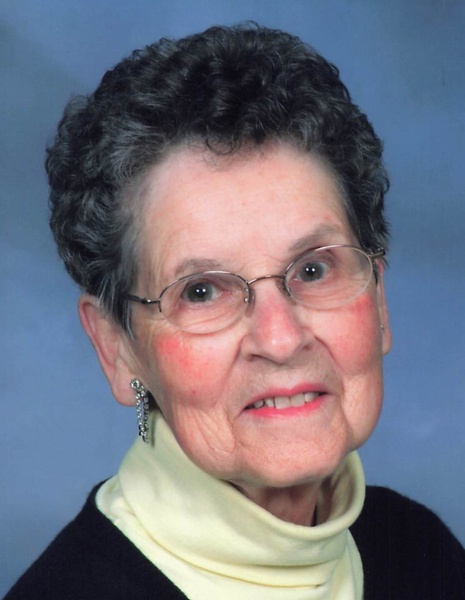 Funeral services for Marie Grossman of Chokio, MN will be held Saturday, December 18, 2021 at 2:00 p.m. at St. Mary’s Catholic Church in Chokio, with Father John Paul Knopik officiating. Visitation will be one hour prior to services at the church on Saturday. Burial will be in the church cemetery.

Although masks are not required, the family strongly encourages masks to be worn at the church for Marie’s Service.

Marie Evelyn Riley was born November 8, 1923 to William and Mabel (Brouillet) Riley in Morris, Minnesota, where she grew up on the Riley family farm outside of Morris. She was baptized and confirmed at Assumption Catholic Church in Morris. Marie began her schooling at St. Mary’s School in Morris, where she later graduated. Following her schooling, Marie worked at Linne Bakery in Morris and in later years she worked at Grace Home in Graceville. Marie was united in marriage to Clarence Grossman on September 9, 1947 at Assumption Catholic Church in Morris. Following their marriage, the couple moved to the Grossman family farm outside of Chokio and in 1980 moved into Chokio. Clarence died on September 5, 2006. Marie continued to live in Chokio until 2015, when she moved to the Grace Home in Graceville, where she continued to live until the time of her death.

Marie was a member of St. Mary’s Catholic Church in Chokio, serving on the Christian Women’s Group. She was also a member of the Chokio Senior Center and The Garden Club. Marie enjoyed gardening, baking, sewing, walking, playing smear, singing, bird watching and caring for her grandchildren. Her faith and volunteering at church was very important to her, as was her Irish Heritage.

To order memorial trees or send flowers to the family in memory of Marie Grossman, please visit our flower store.