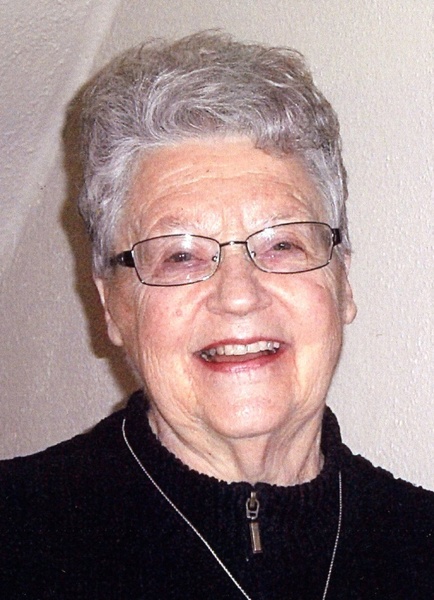 Marilyn Joyce Erickson, daughter of Russell and Viola (Johnson) Ouren, was born January 30, 1931 at Rothsay, Minnesota.  She was baptized February 12, 1931 at Rothsay, Minnesota.  She grew up on a farm west of Terrace, Minnesota.  She attended District 27 School in Terrace through the eighth grade.  She was confirmed at the Glenwood Lutheran Church in May of 1945 by Reverend David Quill.  She attended Glenwood High School, graduating in 1948. She attended Minnesota School of Business in Minneapolis graduating in December of 1949.  She worked for Kansas City Life Insurance Company until June of 1958.  She was united in marriage to Ellsworth Erickson of Starbuck, Minnesota on June 21, 1958 at Glenwood Lutheran Church by Reverend John Spencer. Marilyn and Ellsworth lived on the family farm.  She was a farming partner and homemaker.  They raised dairy cattle and registered Duroc hogs in a breeding business.  They both won several trophies and awards at various hog shows.  Ellsworth passed away March 7, 2002 at the family farm.  Marilyn continued to live on the farm.

Marilyn died on Wednesday, December 26, 2018 at the Brookings Hospital in Brookings, South Dakota.

She is survived by special nieces: Karen Erickson of Starbuck and Nancy Arneson and her husband Brad of New London; sister: Jan Flesland of New London; brother Dallas Ouren of Glenwood and many nieces, nephews and friends. She was preceded in death by her husband Ellsworth; her parents and infant sister Omie Ouren.

Starbuck Funeral Home in Starbuck, Minnesota is in charge of arrangements for Marilyn.

To order memorial trees or send flowers to the family in memory of Marilyn Erickson, please visit our flower store.