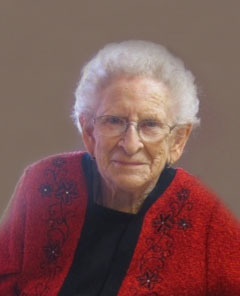 Funeral services for Marlys Alm of Morris will be held Thursday, December 10, 2015 at 10:30 a.m. at St. John's Lutheran Church in Donnelly. Reverend Michael Nelson will be officiating. Visitation will be held Wednesday from 5 to 7 p.m., with a prayer service at 6:00 and a time of sharing to follow at the Pedersen Funeral Home in Morris and for one hour prior to services at the church on Thursday. Burial will be in Vinger Cemetery in Donnelly.

Marlys Enid LeSage, daughter of Emil and Verrena (Bloom) LeSage, was born February 19, 1915 in Morris, Minnesota. Marlys grew up in Morris and spent first and second grade in country school. She later went to Longfellow School in Morris and graduated from Morris High School in 1933. On February 7, 1934, she was united in marriage to Parnel Alm in Kerkhoven, Minnesota. The couple made their home in Donnelly, Minnesota, where Marlys worked as a cook and waitress at the Dries' and Corner Café. She later worked as a cook at the Donnelly School. Marlys retired as one of Donnelly's first female assistant postmasters. She lived in Donnelly for 66 years and was very active in the community. Marlys made quilts with the weekly Do Days sewing group, helped at the church pie booth during the annual threshing bee, and taught crocheting at the Donnelly and Morris Senior Citizens Centers. In 2000, she moved to Morris to be closer to the senior center and to the doctor. Marlys entered West Wind Village in 2012, where she continued to live until her time of death.

Marlys was an active member of St. John's Lutheran Church in Donnelly, where she taught Sunday school and sang in the choir. She enjoyed playing whist, bingo and putting puzzles together. Marlys also had a passion for shoes, collecting teapots and following her favorite sport's team, the Minnesota Twins.

Marlys died on Saturday, December 5, 2015 at West Wind Village in Morris, having lived to reach the age of 100 years.

She is survived by one son: John (Kay) Alm of New Albany, OH; three daughters: Connie Reimers of North Mankato, Barb (Don) Rilley of Chokio and Pam Peterson of St. Michael; 14 grandchildren; 44 great-grandchildren; 45 great-great-grandchildren; son-in-law: Rick Andrew of Webster City, IA and many nieces and nephews. She was preceded in death by her husband; one daughter: June Andrew; one granddaughter: Pat Johnson; her parents; two brothers: Wayne and Donald LeSage; one sister: June Holck and one son-in-law: Reuben Reimers.

To order memorial trees or send flowers to the family in memory of Marlys Alm, please visit our flower store.