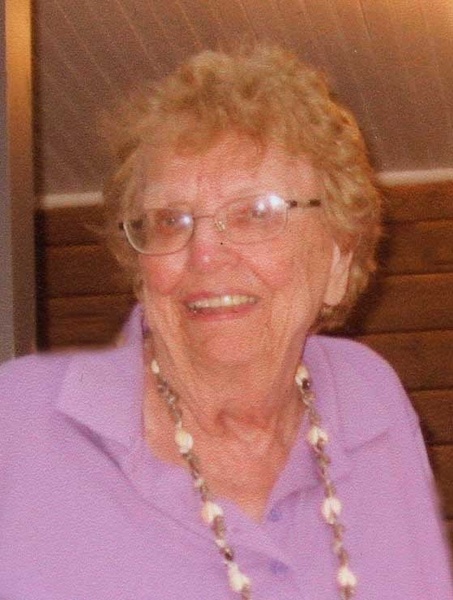 Funeral services for Martha "Marty" Kroening of Morris, MN will be Tuesday, May 31, 2016 at 1:30 p.m. at St. Paul's Evangelical Lutheran Church in Morris, with Reverend Donald Main officiating. Visitation will be one hour prior to services at the church on Tuesday. Burial will be in Summit Cemetery. Military rites will be provided by the Morris American Legion, V.F.W. and AmVets.

Martha Margaret "Marty" Kroening, daughter of Emil and Margaretha (Puchta) Kroening was born December 29, 1921 in Scott Township in Stevens County, Minnesota. She was baptized and confirmed at Peace Lutheran Church in Morris by Gustav A. Pilgrim. Marty attended elementary school in rural Alberta and graduated from Springfield High School. She was also a graduate of Moorhead State College and the University of Minnesota, Morris.

During her career Marty was a teacher, singer, member of the United States Marine Corps Reserves; she worked in the Executive Office of President Kennedy and Vice-President and Senator Humphrey and retired working in the Public Relations Office at the University of Minnesota, Morris. Marty loved living on the family farm and was still actively involved until the time of her passing.

Marty was a member of St. Paul's Evangelical Lutheran Church in Morris. She enjoyed playing Whist, entertaining with goose dinners, watching Minnesota sports teams and keeping the tradition of the July 4th Kroening Family Reunion with its competitive horseshoes.

Marty died on Wednesday, May 25, 2016 at the Stevens Community Medical Center in Morris, MN. She was 94 years old.

She is survived by two sisters: Fern Zimmerman of Chokio and Juline Henderson of Las Vegas, NV; one sister-in-law: Olga Kroening of Phoenix, AZ and many nieces and nephews. She was preceded in death by her parents; four brothers: Loren, Carl, Norman and Herman and four sisters: Evelyn Kussatz, Nora Morris, Lucinda Madison and Esther Hannay.

Martha "Marty" Kroening
To order memorial trees or send flowers to the family in memory of Martha Kroening, please visit our flower store.