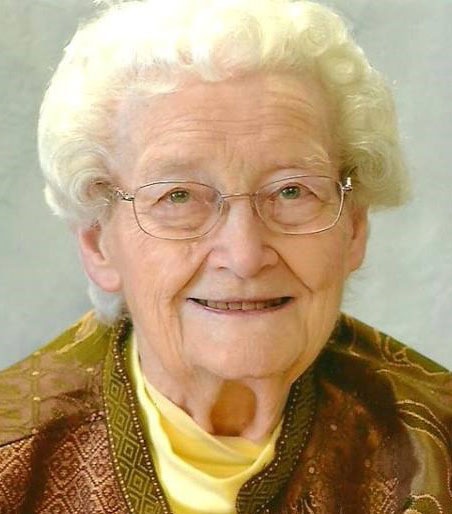 Funeral services for Marvel Wagner of Morris, MN will be held Friday, December 2, 2016 at 10:30 a.m. at Pedersen Funeral Home in Morris, MN, with Reverend David Christenson officiating. Visitation will be Thursday from 5 to 7 p.m. at the Pedersen Funeral Home and one hour prior to services. Burial will be in St. Galls Cemetery in Tintah, MN.

Marvel Avis Wagner (Griffen) was born June 22, 1925 to Meta & Charles Griffen, in Hancock County, Garner Iowa. Marvel was the youngest of six children, Eldo Griffen, Dale Griffen, Bernadine Smith, Estelle Griffen & Ruth Moerke. Marvel was baptized July 17, 1927 by Calvin Schmidt in Ell Township, Reform Parsonage, Garner, Iowa. At age 4 Marvel moved to Alberta, MN, where she attended school for 7 years. In 1939 she moved to Morris, MN, where she then graduated high school in 1943. She was confirmed March 17, 1940 by Fred Maske at Peace (Faith) Lutheran Church. Marvel attended the University of Minnesota, in Minneapolis and took various classes in Alexandria Tech. In 1972 she received her B.S. in Preschool & Elementary Teaching. August 27, 1947 Marvel Avis Griffen married Joseph Anthony Wagner. They were overjoyed to adopt their son, Terry Lee Wagner in 1954 and their daughter, Debra Kim Wagner (Kolden) in 1957. They lived in the Pepperton Township, where their address was Donnelly and their phone number was Morris for 17 years, where they had a diversified farm with animals & crops. They attended church and school in Alberta. 1964 they moved to town (Morris). Marvel worked very hard at numerous positions including teaching in country schools in Stevens County, Big Stone Hutterite Colony, Hancock public school, Adult Ed/Parenting in Morris. She also worked as a consultant for several companies over the years such as Tri Chem Paints, Playhouse Toys and Creative Memories. In 1973 she organized and began Stevens County Child Care Center (now Morris Area Child Care Center), where she was the Executive Director. In 1978 she took the position of Principal Secretary for the Minority Student Program at the University of Minnesota Morris, until she retired in 1990.

Marvel died on Saturday, November 26, 2016 at the Stevens Community Medical Center in Morris, MN. She lived to 91 years.

She is survived by her daughter, Debbie Kolden of Breckenridge; son, Terry Wagner of New Prague; grandchildren, great-grandchildren, many nieces, nephews, and friends. She was preceded in death by her husband, Joseph Wagner; son-in law, Arnie Kolden; brothers, sisters, cousins and friends. To order memorial trees or send flowers to the family in memory of Marvel Wagner, please visit our flower store.