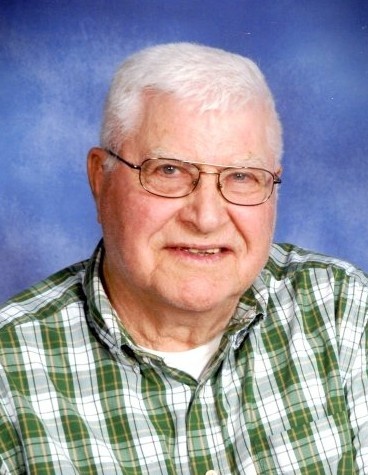 Funeral services for Marvin Pochardt, of Starbuck, Minnesota, will be on Saturday, May 11, 2019, at 11:00 a.m. at Immanuel Lutheran Church in rural Starbuck.  Reverend Paul Johnson will be officiating.  Visitation will be on Friday, from 5:00-7:00 p.m. at the Starbuck Funeral Home in Starbuck and will continue one hour prior to the service at the church on Saturday.  Burial will be at Immanuel Lutheran Cemetery at a later date.

Marvin Richard Pochardt was born on June 13, 1931 in Eldorado Township, Stevens County, Minnesota to Berthold Ludwig and Louise Katharina (Reimann) Pochardt.  He was raised in Eldorado Township and was baptized at Trinity Lutheran Church in Johnson.  Marvin attended country school in Eldorado Township until 1942, when his family moved to Walden Township, Pope County, Minnesota. Marvin was confirmed in the Lutheran faith at St. John’s Lutheran Church in Hancock, Minnesota.  He attended District 53 Country School through the 8th grade and then continued his education at Starbuck High School, graduating with the class of 1950.  Following his schooling, he farmed with his brothers.  He was united in marriage to his lifelong love, Beverly Schwendemann, on February 28, 1953, at Immanuel Lutheran Church in rural Starbuck.  They made their home in Walden Township where they farmed and raised their family.  After farming for over 45 years, they retired in 2002 and moved into Starbuck, Minnesota.  Beverly preceded Marvin in death on September 30, 2012.  Marvin continued to live in their home until 2015 when he moved into Holly Ridge Manor and then in December 2017, he became a resident of Minnewaska Lutheran Home.

Marvin was an active member of Immanuel Lutheran Church.  He was also a member of the Production Credit Association, NFO, Farmer’s Union, and 4-H.  In his younger years, Marvin enjoyed hunting.  Marvin was a good athlete; playing horseshoes, bowling, golfing, and especially baseball – playing on local Hancock and Cyrus teams.  They would attend Minnesota Twins games, play cards at the Senior Center in Glenwood, an occasional trip to the casino and in later years, Marvin played bingo at Holly Ridge and Minnewaska Lutheran Home.  Most importantly, Marvin cherished the time that he was able to spend with his family.

Marvin died peacefully on Tuesday, May 7, 2019 at the Minnewaska Lutheran Home in Starbuck.  He was 87 years old.

Starbuck Funeral Home in Starbuck is in charge of arrangements for Marvin.

To order memorial trees or send flowers to the family in memory of Marvin Pochardt, please visit our flower store.