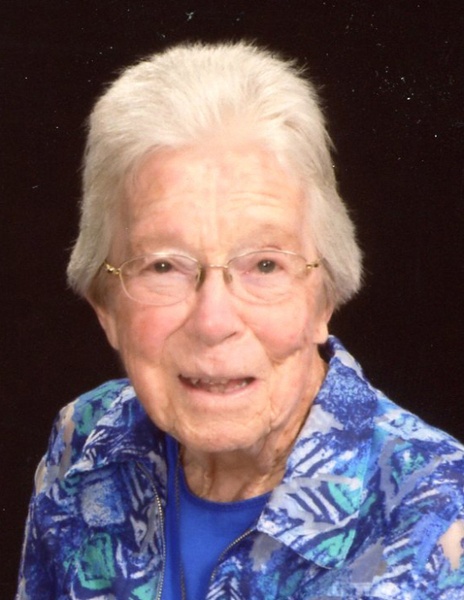 Funeral services for Mary Ellen Montonye of Morris, MN will be Monday, December 23, 2019 at 10:30 a.m. at Assumption Catholic Church in Morris, MN, with Father Todd Schneider as Celebrant. Visitation will be Sunday, December 22, 2019 from 4 to 7 p.m., with a rosary at 4:00 and a prayer service at 7:00 at the Pedersen Funeral Home in Morris and for one hour prior to services at the church on Monday. Burial will be in Calvary Cemetery in Morris.

Mary Ellen Murphy was born on November 4, 1924, in Graceville, Minnesota to William and Mary (Dewane).  She was raised in Horton Township of Stevens County where she attended District 41 country school.  Mary Ellen continued her education at St. Mary’s High School in Morris, graduating with the class of 1941.  She went on to St. John’s School and Nursing in Fargo, North Dakota.  After her schooling, she started working at the hospital in Graceville and was introduced by a co-worker to Paul Montonye.  The two began dating and were married on October 30, 1947 at Assumption Catholic Church in Morris.  They made their home in Horton Township and welcomed four children to their family.  Paul died on December 17, 1985.  Mary Ellen returned to work as a nurse’s assistant until July of 1999.  She continued to live in Morris until the time of her death.

Mary Ellen was a member of Assumption Catholic Church in Morris.  She was a member of the St. Michael’s Mission Group and the Bible Study Group.  Mary Ellen also volunteered her time at the Stevens County Food Shelf, West Wind Village, and St. Mary’s School.  She enjoyed fishing with her children and grandchildren, crocheting, tatting, gardening, reading, and traveling.  Mary Ellen was always serving others and had a servant’s heart; so much so that she was awarded the Pay It Forward Award.  She loved having her children, grandchildren and great-grandchildren to her humble home and instilling in them to trust in the Lord because he will take care of you – Faith will get you through!

IN LIEU OF FLOWERS THE FAMILY PREFERS MEMORIALS TO KNUTE NELSON HOSPICE, COURAGE COTTAGE, STEVENS COUNTY FOOD SHELF OR THE CHARITY OF YOUR CHOICE.

To order memorial trees or send flowers to the family in memory of Mary Ellen Montonye, please visit our flower store.