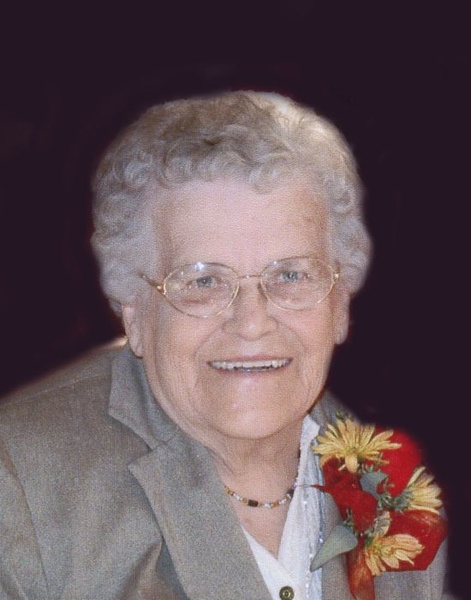 Mayme Irene Wefel, daughter of George and Ida (Lampert) Wefel was born on December 1, 1921 in the little town of Jeffers, Minnesota. She graduated from Jeffers High School. Mayme continued her education at a normal training class, which qualified her to teach. Much later in life, she earned her bachelor's degree from the University of Minnesota Morris and taught school for many years.
She was united in marriage to Clifford Sabolik in 1942. Cliff was a close neighbor and friend. In the spring of 1943, the couple began farming in the Jeffer's area. In the fall of 1947, the couple purchased a farm near Kensington, where they raised grain and milked cows. Cliff died of a heart attack in August of 1976. Mayme sold the livestock and moved to Minneapolis working for Trevilla Nursing Home in Golden Valley, MN. The next spring, Mayme purchased a dress shop in Starbuck and her and the boys remodeled it into a café. She and Dave ran the café from February of 1977 until Don and Lynda purchased the café in 1992. Mayme's granddaughter Jessi owns and operates the café today. After retiring, Mayme purchased a home in Kensington before moving to Starbuck in 1998. She made Starbuck her home until moving into Grand Arbor in Alexandria in January of 2014.

Mayme will be remembered as a strong woman. Education was very important and was instilled into her children and grandchildren. As a teacher, Mayme had a way of connecting with the kids she taught. She loved cooking and baking; her pies, rolls, and cookies will always be remembered. Mayme had a large cookie jar collection. Her love of her sons and grandchildren is what made Mayme feel blessed. She had said "I have had a wonderful life. Many joys and sad days also, but the good outweigh the bad. I thank God for that."

Mayme died on Thursday, March 30, 2017 at Grand Arbor in Alexandria, Minnesota. She was 95 years old. To order memorial trees or send flowers to the family in memory of Mayme Sabolik, please visit our flower store.