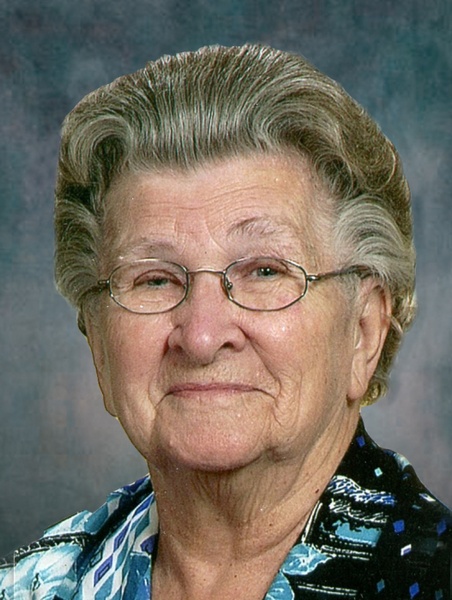 A celebration of life service for Melvina “Mel” Larson of Morris, MN will be Wednesday, August 29, 2018 at 10:30 a.m. at Faith Lutheran Church in Morris, MN, with Reverend Dell Sanderson officiating. Visitation will be Tuesday, August 28, 2018 from 4 to 7 p.m. at the Pedersen Funeral Home in Morris and for one hour prior to services at the church on Wednesday. Burial will be in Summit Cemetery in Morris.

Melvina Gertina Wevley was born March 13, 1922 in Highlandville, Iowa to Meyer and Della (Amundson) Wevley. She was baptized at Big Canoe Church in Highlandville. The family moved to Barnsville, MN in 1929. Melvina attended school and proudly graduated from the 8th grade. The family moved to Morris, MN in 1939. Melvina married Lloyd Amelsberg in 1943, to which three children, Robert, Ruth and Violet were born. In 1966, Melvina married Carroll Larson and another son, Kelly, was born.

Melvina held a strong faith in her Lord. She strongly believed that all things happen for a reason and the Lord would never give her a burden she could not handle. Melvina always put her children first. She worked hard and taught them the value of love, kindness and respect. She absolutely adored her grandchildren and spent as much time with them as she could. Melvina was an avid Twins and Vikings fan. Her passions were bowling and fishing; she bowled on a league until she was 93 years old. She loved needle point, quilting, and making cookies, which she shared with her neighbors. Melvina was an active member of Faith Lutheran Church, V.F.W., American Legion, and Eagles Auxiliaries.

Melvina peacefully went to be with her Lord on Thursday, August 23, 2018 at West Wind Village in Morris, MN, surrounded by the love of her family. She was 96 years old.

Melvina left an everlasting mark on everyone she met with her quick wit, sparkling blue eyes and contagious smile. She will be deeply and forever missed by her family and all that called her friend.

Pedersen Funeral Home in charge of the arrangements. To send condolences to the family please visit www.pedersenfh.com.

To order memorial trees or send flowers to the family in memory of Melvina Larson, please visit our flower store.