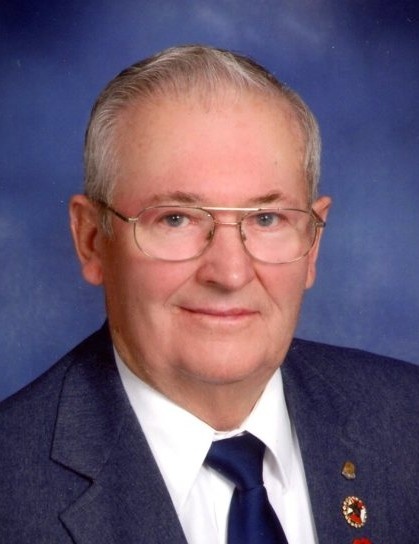 Funeral services for Merle Fennell of Cyrus, MN will be Friday, April 26, 2019 at 10:30 a.m. at Assumption Catholic Church in Morris, MN, with Father Todd Schneider serving as celebrant. Visitation will be Thursday from 5 to 7 p.m., with a prayer service at 5:00 and a Knights of Columbus Rosary at 7:00 p.m. at the Pedersen Funeral Home in Morris and for one hour prior to services at the church on Friday. Burial will be in St. Malachy Catholic Cemetery in Clontarf, MN.

Merle Thomas Fennell was born on January 26, 1934 in Clontarf MN to Joseph and Eleanor (Bouta) Fennell.  Merle was baptized, made his First Communion, and was confirmed at St. Malachy Catholic Church in Clontarf, MN. He attended Clontarf Elementary School, and graduated from Benson High School in 1953.

After graduation, he worked on the Great Northern Railroad for 2 years.  He then went to Minneapolis, working a short time for Mn Casket Company where he made bedding.  He joined the US Army in 1955, where he served for 2 years.  He was stationed in Germany where he had 6 weeks of Infantry, and 8 weeks of schooling to learn Wheel Vehicle Mechanics.  While in Germany, he was able to tour other countries, Italy and France being his favorites. Upon returning to the states, he worked again for the Great Northern Railroad for a short time, then went to Rochester MN, where he worked for a year at GMC Truck Service, changing oil on trucks.  He returned to Clontarf where he worked for Fennell’s Creamery and Benson Produce.  In 1960 he was hired by the Minnesota Highway Department in Golden Valley.  He was an apprentice there until 1962, where he received his first position as Field Mechanic in Marshall MN.  In 1968, he took the Field Mechanic position in Morris, working there for 25 years.  He retired in 1992 with 32 years of service with MnDOT.

In 1962 he was married to Bonnie Bradesen.  To this union five children were born. They were married until 1991, when they parted ways. Bonnie passed away in July, 2010.

Along with being a mechanic, Merle was a master handyman.  He could build, do electrical and plumbing work, and could fix just about anything.  His biggest projects were restoring the house he and Bonnie had moved from Clontarf to Morris in 1972 and building his home in Cyrus in 1997. He also enjoyed lending a hand to anyone working on a project.

Merle and Arla wintered in Alamo, Texas for the last 20 years.  Over this time, they have made long-lasting friendships.  They enjoyed many activities while there, including trips to Mexico.  Merle was always making improvements on the trailer.  This year, he had just finished building a ramp and landing for the trailer the day before heading back to Minnesota.  He also enjoyed refurbishing golf carts while there.  They also enjoyed spending summers back in MN at their seasonal camping spot at Shady Oakes in Osakis.

Merle passed away on April 18, 2019 at the St. Cloud Hospital due to kidney and heart failure, having lived to the age of 85 years.

There to welcome him in heaven with the Lord were his parents, Joseph and Eleanor; an infant sister, Catherine Fennell; his sister, Donna Gode; sister-in-law, Mary Fennell; brother-in-law, Richard Dorschner; nephew, Michael Fennell; mother of their children: Bonnie Fennell, and many aunts, uncles, cousins, and friends.

To order memorial trees or send flowers to the family in memory of Merle Fennell, please visit our flower store.