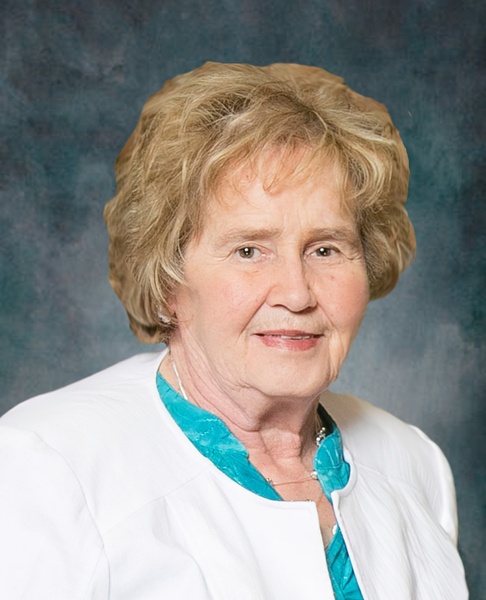 Funeral services for Nancy Bruer of Morris, formerly of Appleton, Minnesota, will be held Saturday, October 2, 2021 at 11:00 a.m. at St. John’s Catholic Church in Appleton, with Father Jeremy Kucera serving as celebrant. Visitation will be Friday from 5 to 7 p.m. at the Pedersen Funeral Home in Morris and or one hour prior to services at the church on Saturday. Burial will be in the Appleton City Cemetery in Appleton.

Nancy Ann Banken, daughter of Theodore Sr. and Marie (Hennen) Banken was born on January 10, 1938 in Morris, Minnesota.  She grew up on a farm in Hegbert Township and attended District 35 country school through the 8th grade and attended the West Central School of Agriculture in Morris for 9-12 grade.  Following her schooling, Nancy worked at Lang’s Bakery and Super Valu Grocery Store.  She was united in marriage to Ronald Bruer on January 21, 1961 at St. John’s Catholic Church in Appleton, Minnesota.  The couple then moved to a farm place by Alberta.  On February 14, 1966, they moved to a farm north of Appleton where they raised their seven children, and continued farming.  Nancy worked for Joe Fox Catering for many years.  In August of 2017, Nancy and Ronald moved to Morris.  Ronald passed away January 4, 2021.  In June of 2021, Nancy moved to the Legacy in Morris where she continued to live until the time of her passing.

Nancy was a member of St. John’s Catholic Church in Appleton, serving on the Altar and Rosary Society.  She was also a member of Homemaker’s Club. She enjoyed baking, sewing, crocheting and embroidery.  She sewed clothes for her children and grandchildren.  She loved gardening and took pride in her flowers.  People would drive by their farm site just to look at her beautiful flowers.  Most of all, Nancy cherished her time spent with her family; She was even known to snapchat and video chat with her children and grandchildren.  Nancy enjoyed the outdoors and fishing when her family was able to get her out to do so, listening to Daniel O’Donnell, dancing and going on bus trips throughout the United States. She had many bird feeders at her home and loved watching the many types of birds that would visit each year.

Nancy died on Monday, September 27, 2021 at The Meadows on University in Fargo, North Dakota. She was 83 years old.

IN LIEU OF FLOWERS THE FAMILY PREFERS MEMORIALS THAT WILL BE DISTRIBUTED IN NANCY’S NAME TO LOCAL CHARITIES.

To order memorial trees or send flowers to the family in memory of Nancy Bruer, please visit our flower store.