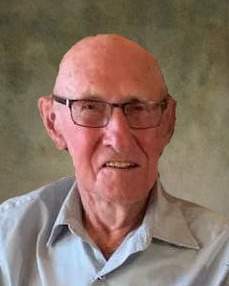 Memorial services for Paul Zimny of Cyrus, Minnesota, will be held Tuesday, November 15, 2022 at 10:30 a.m. at Assumption Catholic Church in Morris, with Father Todd Schneider officiating. Visitation will be one hour prior to the service at the church on Tuesday. Burial will be in Calvary Cemetery, Morris, MN.

Paul Joseph Zimny, Jr. was born to Paul and Agnes (Woitas) Zimny on May 26, 1926 on a farm in Lansford, North Dakota.  The sixth of seven children, his mother died when he was 5 years old.  After grade school he attended Catholic boarding school in Wild Rice, ND, where his oldest sister, a nun, was a teacher.  After graduating high school at age 16, he returned to the farm to assist his father.  With his father's support and encouragement, he attended the Wahpeton State School of Science to study aviation mechanics. He became a self-taught aviator and though he knew how to fly, to receive his pilot's license he had to take instructions; a requirement he found ironic.  Paul's first plane was a 1936 Aeronca C3, which he enjoyed flying around North Dakota.

Paul became employed with Boeing in Wichita, Kansas as an airplane mechanic, building B47s for the Air Force.  He worked for Boeing in the winter months, and returned to North Dakota in the spring to farm.  Paul met the love of his life, Carol Husmann, through a friendship with Carol's oldest brother, Derald.  ​They were married in Minneapolis, MN on February 27th, 1965. They settled in Glenburn, ND, where Paul farmed from spring to fall, and continued to work in aviation during the winter months, now for Lockheed at the Air Force base in Minot, ND.

The couple continued farming in North Dakota during the farming season, and spent winter months following Paul's aviation work for Lockheed across the country, including Phoenix, AZ, Dover, DE, and Sacramento, CA.

Paul and Carol ​began their family in 1968, and had four young children - Greg, Bruce, Wayne, and Ann - when they purchased a farm near Cyrus, MN.  They moved to the farm in August 1974, and had their fifth child, Karen, in 1979.  The couple loved raising their children on the farm, which had plenty of room to play and a river for swimming and fishing.  Paul never abandoned his love of airplanes, and continued to build and fly his own planes on the farm, including a Weedhopper and a Chinook. His last airplane project was restoring a 1960s Piper Tri-Pacer, which was salvaged from a neighbor's farm.  Paul continued to farm until he was 90 years old, and even then, spent remaining years assisting neighbors with their own planting and harvest cycle.

In addition to his many talents, Paul was a gifted artist, and leaves behind many sketches and paintings to be forever enjoyed. He was also a master at the triple word score in Scrabble, and seemed to always have that winning ace of hearts in the family’s countless holiday games of Royal Rummy.

Paul and Carol spent winter months for the last 15 years in Mesa, Arizona, where they enjoyed an active life in a mobile home park, hosted visits from their children and grandchildren, and made many close friends.

Pedersen Funeral Home in Morris is in care of the arrangements for Paul.
To order memorial trees or send flowers to the family in memory of Paul Joseph Zimny Jr., please visit our flower store.
Zimny, Paul.pdf
Open