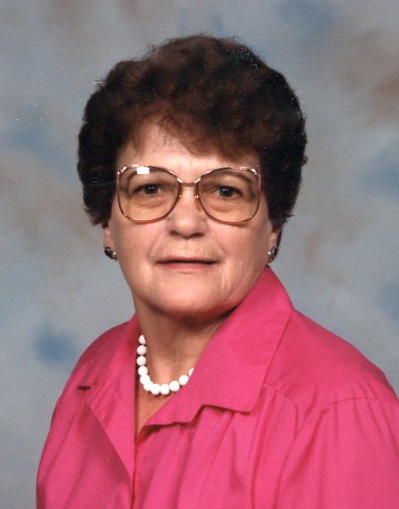 Memorial services for Phyllis Berg of Starbuck, Minnesota will be Friday, May 26, 2017 at 11:00 a.m. at Immanuel Lutheran Church, near Starbuck. Reverend Paul Johnson will be officiating. Visitation will be one hour prior to services at the church on Friday. Burial will be in the church cemetery.

Phyllis Mae Evjen was born on September 7, 1923 in New Prairie Township, Starbuck, Minnesota to Palvin and Mabel (Alleckson) Evjen. She was raised in rural Starbuck where she was baptized and confirmed in the Lutheran faith at Immanuel Lutheran Church. She attended school in Starbuck, speaking Norwegian at home; Phyllis needed to learn English at age 6. She graduated with the Starbuck High School class of 1941 on May 29, 1941. During school, she worked for Doc Geisen, at his home, helping to care for his children. Phyllis was united in marriage to Cornelius Berg in April of 1944. They made their home in Starbuck until 1956, when they moved to the St. Francis area where Cornelius worked in construction and farming. Phyllis stayed home and raised the children, taking care of their youngest daughter, Susie, who needed constant health care. In 1967 Phyllis received the “Mother of the Year” award from the Anoka Chamber of Commerce. After Susie died in 1970, the family moved back to Starbuck where they farmed and Phyllis worked at the Minnewaska Lutheran Home. After Cornelius’ death in 1987, Phyllis stayed on the farm until 2004 when she moved into Starbuck. In 2011, Phyllis became a resident of the Minnewaska Lutheran Home where she remained until her death.

Phyllis was a life-long member of Immanuel Lutheran Church in Starbuck where she served with other women as part of the lady’s aide. She loved the outdoors, shiny cars, traveling and dogs. Phyllis was also an accomplished horseback rider; there was not a horse that she couldn’t ride. She loved to bake, especially her homemade bread and buns. She would time it just right so the children could enjoy warm bread when they got off of the bus after school. Phyllis helped with the fieldwork and loved to spend time mowing the lawn and fishing - even cleaning what she caught! Phyllis was a strong, loving mother who was always making sure that her children’s needs were met. When they were young kids, she was very creative and was able to make toys for them when their finances didn’t allow them to purchase them. Later in her life, Phyllis enjoyed going to casinos. Most importantly, she cherished the time that she was able to spend with her children and grandchildren and great-grandchildren.

Phyllis died peacefully on Tuesday, May 23, 2017 at the Minnewaska Lutheran Home in Starbuck, she lived to reach the age of 93 years.

Phyllis is survived by her three sons: Gary (Joyce) Berg, Dennis (Darlene) Berg and Daryle Berg all of Anoka; one daughter: Shelly Grimsley (Gordy Espelien) of Starbuck; two sisters: Beatrice Tonn of West St. Paul and Beverly Aslakson of Delano; 15 grandchildren; 37 great-grandchildren; 2 great-great-grandchildren and many nieces, nephews and extended family. She is preceded in death by her husband; daughter, Susan; son, Curtis; and sister, Avis Baukol.


Starbuck Funeral Home in Starbuck is in charge of the arrangements.

To order memorial trees or send flowers to the family in memory of Phyllis Berg, please visit our flower store.