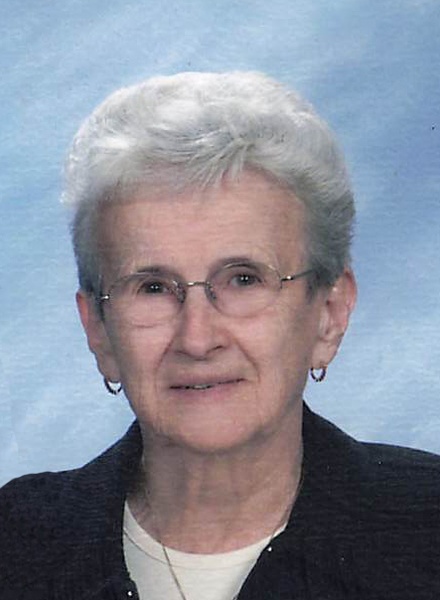 Memorial services for Phyllis Bright will be held Friday, October 8, 2021 at 11:00 a.m. at Trinity Lutheran Church in Cyrus, Minnesota, with Reverend Marlin Mohrman officiating.  Visitation will be on hour prior to the service.  Burial will be at Scandia East Cemetery, rural Cyrus, Minnesota.

Phyllis Audrey Estensen, daughter of Theodore and Alma (Solvie) Estensen, was born July 5, 1926 on a farm in New Prairie Township, south of Cyrus, Minnesota.  Phyllis was baptized and confirmed at Trinity Lutheran Church in Cyrus.  She graduated from Cyrus High School Class of 1944.  She was united in marriage to Charles Bright June 8, 1946 at Trinity Lutheran Church.  Phyllis worked off the farm at several places but farmed together with Chuck, their pride and joy was raising beef cows and calves. Through the years they lived on several different farms around Cyrus and Morris, until they later settled on a farm in Framnas Township in Stevens County for over 50 years until their retirement.  On October 19, 2013, Phyllis and Chuck made their home at Grand Arbor in Alexandria, Minnesota where she continued to live until the time of her death.

Phyllis was a lifelong member of Trinity Lutheran Church in Cyrus where she was active in various ladies’ groups and taught Sunday school.  She was also a 4-H leader for many years.  She enjoyed gardening, canning, cooking, playing cards, board games and puzzles.  Phyllis was a very faithful woman who loved the Lord.  She will be deeply missed by her loving family and friends.

Phyllis passed away Saturday, October 2, 2021 at Grand Arbor in Alexandria, Minnesota.  She was 95 years old.

In lieu of flowers, memorials are preferred to Knute Nelson Hospice or a charity of your choice.

Pedersen Funeral Home in Morris is in charge of the arrangements for Phyllis.

To order memorial trees or send flowers to the family in memory of Phyllis Bright, please visit our flower store.