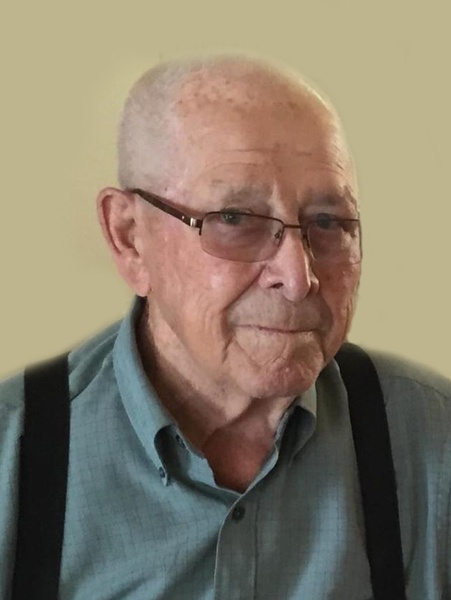 The memorial service for Robert "Punk" DeGier, of Hancock, Minnesota will be held on Saturday, October 29, 2016 at 10:30 a.m. at the Bethel Evangelical Lutheran Church in Morris, with Reverend Rob Sauers officiating. Visitation will be on Friday, October 28th from 5 to 7 p.m. with a prayer service at 6:30 p.m. at Pedersen Funeral Home in Morris, and Saturday one hour prior to the service at the church. Burial will be at the Lakeside Cemetery, Hancock.

Robert Charles "Punk" DeGier, son of Peter and Ella (Biesterfeld) DeGier was born on October 12, 1930 in Moore Township in Stevens County, Minnesota. He attended country school at District #17 before attending Hancock High School in Hancock, Minnesota. After his schooling, Punk began farming with his father. He entered the United State Army in August of 1953 and was honorably discharged in June of 1955. Punk was united in marriage to Jean Lytle on December 27, 1958 in Watertown, South Dakota. The couple made their home north of Hancock, where they raised their family and farmed. After retiring from farming, Punk continued to stay busy hauling pigs for Riverside Express.

He was a member of the Bethel Evangelical Lutheran Church, the American Legion and V.F.W. Club all in Morris. In his younger years, Punk enjoyed bowling and singing in the Morris Male Chorus. Punk and Jean spent each summer taking the family on camping trips. In his later years you could find Punk with friends at the By-Lo having coffee, watching his Minnesota sports teams or playing cards with friends. He and Jean loved taking their annual trips and spending time in Branson, Missouri.

In Lieu of flowers, the family wishes memorials are given in Punk's name to the charity of your choice. Robert "Punk" DeGier
To order memorial trees or send flowers to the family in memory of Robert DeGier, please visit our flower store.