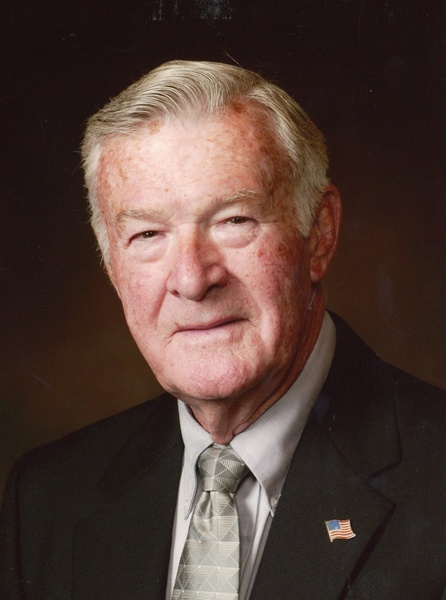 Funeral services for Bob Stevenson will be on Saturday, July 1, 2017 at 10:30 AM at First Lutheran Church in Morris. Visitation will be on Friday, June 30, from 4:00 - 7:00 PM, with a Masonic prayer service at 7:00 at the Pedersen Funeral Home in Morris and will continue one hour prior to the services at the church on Saturday. Burial will be in Summit Cemetery.

Robert Maxwell Stevenson, son of Floyd and Bertha (Nicely) Stevenson, was born on July 4, 1927 in Morris, Minnesota. He grew up and attended school in Morris. In 1945, at the age of 17, Bob enlisted in the United States Navy, serving during World War II. He was honorably discharged in 1947, and returned to Morris, graduating from Morris High School in 1947.

Bob was united in marriage to Harriet Tomlin on July 12, 1952 at First Lutheran Church in Morris. To this union, two daughters, Barbara and Kathleen, were born.

Bob worked at the State Highway Department and later started Stevenson’s Office Supply and License Bureau. In 1966, Bob was elected a Stevens County Commissioner. He was re-elected and continued to serve for the next 40 years until his retirement in 2006. Bob continued to live in Morris until the time of his death.

Bob was a member of First Lutheran Church, Morris V.F.W., American Legion, AmVets and the Masonic Lodge. In 1998, the Association of Minnesota Counties named Bob the Outstanding County Commissioner of the Year. In 2004, the Association of Minnesota Counties chose him to receive the Jim Parker Leadership Award from Community Health Services of Minnesota. He was one of the founders of County Based Purchasing, which led to the formation of PrimeWest, a health provider network that serves this region. Bob enjoyed hunting, fishing, dancing and spending time with family and friends.

Pedersen Funeral Home in Morris, Minnesota is in charge of the arrangements.


To order memorial trees or send flowers to the family in memory of Robert Stevenson, please visit our flower store.