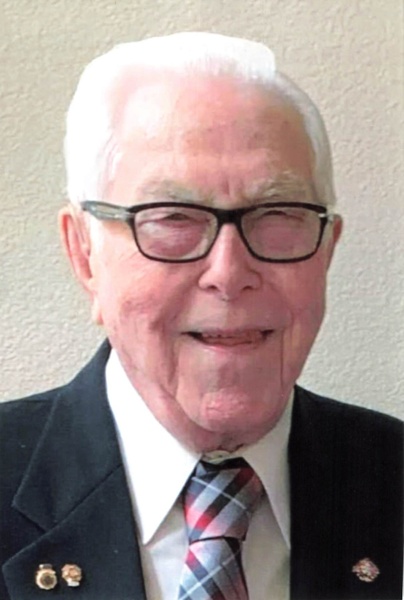 Roger Leon DeCamp, the first born child of James Clifford and Clara Amolia (Asmus) DeCamp, was born January 26, 1927 in their Stevens Township farm home.  Roger attended District 31 country school, but the hardships of the Great Depression led James Clifford to auction the farm equipment, and the family moved to Chokio to live with Grandma Bertha Asmus. Roger’s father purchased a pool hall in Tracy, MN where the family lived for a time. They returned to Chokio in 1943, where Roger graduated with the Chokio HS class of 1944.

Roger worked in Oregon as a welder in the Portland Naval Shipyard, returning to Minnesota to enlist in the Navy at Fort Snelling. He received training in aviation metalsmithing at Norman, OK, departing from San Francisco for Guam.  After completing his WWII military service with honors, he returned to Chokio.

At a dance in Graceville, MN, Roger asked a poised, petite, pretty young lady to dance. This was the start of what would be a lifelong loving partnership.  Roger and Rosella (Rosie) Goodhart were married on October 18, 1948 at Holy Rosary Catholic Church in Graceville.  The couple initially made their home in Chokio, moving in the spring of 1952 to acreage south of Chokio, where they raised their five children.  Roger’s three sons began taking over the farming operation after completing their education. He took great pride in what they accomplished.  Roger and Rosie built a new home in Chokio which they enjoyed for 20 years, before moving to a Grace Village assisted living apartment in March, 2013, a return to Rosie’s childhood hometown on Lake Toqua. Roger was a devoted, entertaining companion and caregiver to Rosie until her death on September 30, 2016.

Roger and Rosie enjoyed years of traveling throughout the US, Europe, the Caribbean, and touring Mexico and Canada.  Roger was happily engaged with his grandchildren’s lives and activities, and devoted to them and his great-grandchildren.  He was a 70-year member of the Chokio American Legion, a member of the Stevens County Historical Society & Museum, and he sang in the St. Mary’s Church Choir for many years.  Roger took up golfing following his retirement.

Roger died peacefully in his sleep on Saturday, July 9, 2022 at Essentia Health-Grace Home in Graceville, MN.  He lived an honorable and fruitful life. Roger was 95 years old.

Memorials preferred to the Chokio American Legion and Auxiliary. Pedersen Funeral Home in Morris is in charge of the arrangements for Roger.

To order memorial trees or send flowers to the family in memory of Roger DeCamp, please visit our flower store.
Open