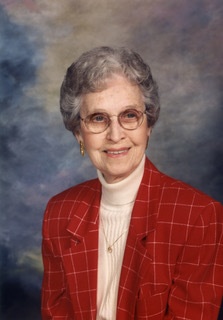 Rose Leuthard Carlson was born July 16, 1918 to John Leuthard and Anna Aretz Leuthard. She was the youngest of their ten children. Her childhood years were spent on their farm south of Chokio. In 1934, during the Great Depression, the family lost their farm and Rose moved to Morris to work at the Merchant's Hotel while she completed high school. In 1939 she married Glen Carlson of Chokio. After spending a few years working in Seattle, WA in the early 1940's, they returned to the Chokio area. Rose and Glen farmed south of town and raised their six children there. They retired from farming in 1978 and moved to a new home in town. Glen passed in 1984; Rose continued to live in their home in Chokio until moving to West Wind Village in Morris in 2009.

Rose was a talented homemaker who was known throughout the Chokio community for her baking, quilting and sewing skills. She was a lifelong member of St. Mary's Catholic Church in Chokio.

Rose passed away at West Wind Village in Morris on Wednesday, December 15, 2016. She lived to 98 years.

She is survived by six of her children: Joan McCollar of Morris MN, Richard (Micki) of Peoria AZ, Julie Carlson (Rick Kulpa) of Lindale TX, Kim Carlson of Reno NV, Laurie Marlowe (Karl) of Reno NV, and Margaret Carlson (Andrew Geller) of Durham NC, as well as seven grandchildren, seven great-grandchildren and two great-great-grandchildren. She was preceded in death by her husband Glen, their daughter Sheila and their grandson Bradley. She was also preceded in death by her nine siblings.

Rose's children would like to express special thanks to the staff at West Wind who provided gracious and loving daily care to her during the seven years she was a resident. The family also wants her nieces, nephews and other relatives and friends to know how much she appreciated their frequent visits and the many errands they lovingly performed for her. To order memorial trees or send flowers to the family in memory of Rose Carlson, please visit our flower store.