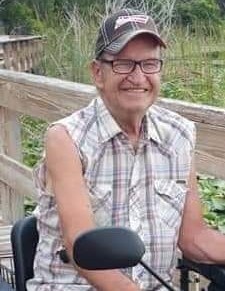 Memorial services for Shayne Smith, of Morris, Minnesota, will be held at a later date at Island Park in Idaho.  Burial will be at Schults Cemetery in Freemont County, Ashton, Idaho.

Shayne Ellis Smith was born on January 29, 1944 in Pocatello, Idaho, to Russell Henry and Della Sada Rae (Mathis) Smith.  He was born and raised in Idaho where he attended high school and Idaho State Vocational College where he earned a degree in Auto Body.  Shayne was united in marriage to Ann Christensen.  Not long after, Ann and their unborn child were killed in a car accident.  Shayne was later married to Sharon Day.  Their son, Shayne Todd, was killed in a car accident as a teenager; the two later divorced.  Shayne and Francine Belanger were married, to this union, two daughters were born: April and Angel.

Shayne was a sweet, generous, funny and very loving man.  He was very talented, especially at drawing, singing, playing guitar and telling stories.  He could fix or build anything.  Shayne lived a hard life, more challenging than anyone should ever have to face, but he never lost love or joy in his heart.

Shayne died on Thursday, March 14, 2019 with his family by his side at West Wind Village in Morris.  He was 75 years old.

Shane is survived by his daughers: Angel (Gordon) Marth of Yuba City, CA and April Smith of Hancock; 5 grandchildren and 8 great-grandchildren; sister, Nona (Joe) Powers of San Diego, CA and one brother, Lonney (Sandy) of Soda Springs, ID.  He is preceded in death by his parents; son, Shayne Smith, Jr., and three brothers: William, Darrell, and Brady.

Pedersen Funeral Home in Morris is in charge of local arrangements for Shayne.

To order memorial trees or send flowers to the family in memory of Shayne Smith, please visit our flower store.