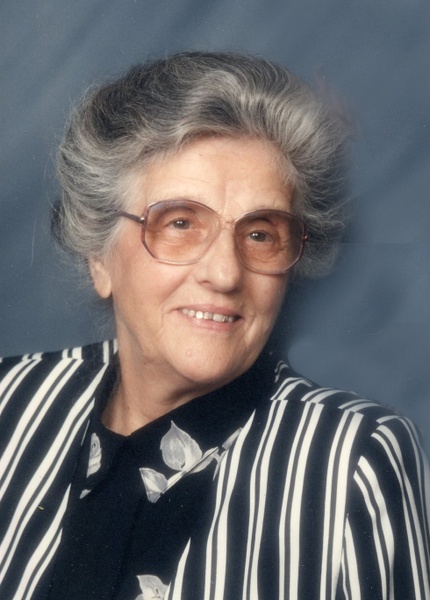 The funeral for Thelma A. Dogotch of Hancock, Minnesota will be held on Saturday, August 13, 2016 at 10:00 a.m. at the Apostolic Christian Church, rural Morris. Visitation will be on Friday at the Pedersen Funeral Home in Morris from 5 to 8 p.m. and one hour prior to services at the church. Burial will be at the church cemetery, near Morris.

Thelma Augusta Koehl, daughter of Chris and Elizabeth (Massner) Koehl was born on November 6, 1916 in Rock Rapids, Iowa. She grew up near Morris, Minnesota and attended country school at District 20 in Horton Township. When Thelma turned 18, she moved to Peoria, Illinois to work as a nanny. World War II began and she got a job with Amour Packing. She continued to work there until the end of the war.

Thelma was united in marriage by faith to Leo Dogotch on July 6, 1947 at the Apostolic Christian Church in Peoria, Illinois; to this union, eight children were born. The couple made their home and farmed near West Bend, Iowa. In 1962, they purchased a farm near Hancock, Minnesota. Leo and Thelma lived on the farm until 1980, when they moved into Hancock. Leo died on December 29, 2007. Thelma continued to live in Hancock before moving to Skyview Plaza in Morris.

She was a member of the Apostolic Christian Church since age 16. Thelma volunteered at the Hancock Senior Center and Stevens County Hospice for many years. She and Leo also volunteered at the Stevens County Food Shelf and with Meals on Wheels. The couple always had a game of Scrabble going and loved to go fishing together. Thelma will always be remembered for her beautiful flower and rock gardens.

Thelma died on Tuesday, August 9, 2016 at the Courage Cottage in Morris at the age of 99 years. Thelma Dogotch
To order memorial trees or send flowers to the family in memory of Thelma Dogotch, please visit our flower store.