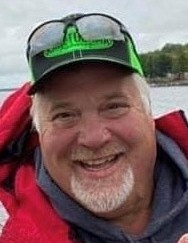 Memorial services for Timothy O'Keefe of Ottertail, Minnesota, formerly of Morris, Minnesota will be Saturday, October 2, 2021 at 5:00 p.m. at the Pedersen Funeral Home in Morris. Visitation will be Saturday from 3:00 to 5:00 at the funeral home. Doug Moser will preside over the service.

Timothy Michael John O’Keefe, son of Michael and Shirley (Bellmore) O’Keefe, was born January 20, 1968 in Breckenridge, Minnesota.  Tim grew up and attended school in Wahpeton, North Dakota.  The family moved to Morris in 1979; Tim continued his schooling at Morris Area High School, graduating with the class of 1986.  Following his education, Tim attended Alexandria Technical College in Alexandria and Ridgewater College in Willmar.  After college, he began working at Tradehome Shoes in Alexandria.  While in Alexandria, Tim was married to Sandy Schuhmacher.  They made their home in Alexandria where they welcomed and raised their children, Madison and Breydin.  Tim later built his dream home on “Tony’s Hole #5” on Thumper Pond Golf Course. In the last few years Tim was a salesman for Safe Step Walk in Tubs. In June of 2019, Tim met the love of his life, AJ.  Tim continued to work, live and enjoy his life in Ottertail until the time of his passing.

Tim was a member of Ducks Unlimited, the Geneva Golf Club in Alexandria and Thumper Pond Golf Course in Ottertail.  He loved spending time golfing, big game hunting, fishing, entertaining, and watching his favorite chef, Guy Fieri, on the Food Network.  He also enjoyed traveling, especially the vacations that he would take with his mother, Shirley.  There was a special place for AJ’s dogs, Bo and Howie.  Most importantly, Tim cherished the time he was able to spend with is friends and family, especially getting to hold his new granddaughter, Myla – he was so proud to be a grandpa!

To order memorial trees or send flowers to the family in memory of Timothy O'Keefe, please visit our flower store.