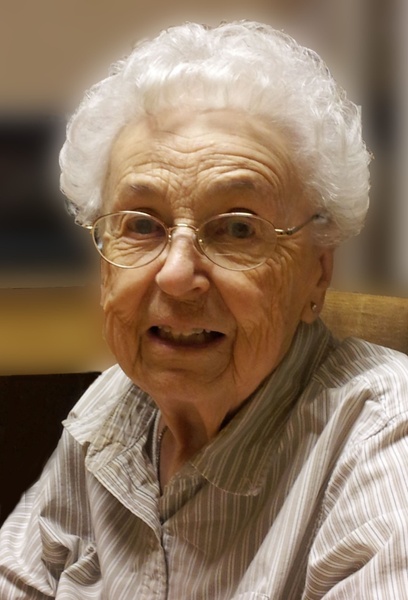 Funeral services for Velma Blomgren of Morris, MN will be held Monday, December 5, 2016 at 10:30 a.m. at Assumption Catholic Church in Morris. Celebrant for the service will be Father Todd Schneider. Visitation will be one hour prior to services at the church on Monday. Burial will be in Summit Cemetery in Morris.

Velma Marie Brouillet, daughter of Zeph and Corinne (Couture) Brouillet, was born February 15, 1920 in Slayton, Minnesota. At the young age of two weeks, Velma's family moved to a farm one mile west of Morris in Darnen Township. While growing up, she received her 12 years of schooling at St. Mary's School in Morris, graduating in 1938. She then attended the College of St. Catherine in St. Paul, graduating in 1942. Following her schooling, Velma taught Business and Physical Education in various Public Schools for the next three years. On February 10, 1945, she was united in marriage to Leon "Stub" Blomgren at Assumption Catholic Church in Morris. For the next 54 years, the couple lived on a farm across the road from Velma's home place. Leon died on March 29, 1999, after being a resident for two years in the Villa of St. Francis in Morris, MN. Velma has continued to live in Morris, since that time.

Velma was a member of Assumption Catholic Church in Morris, where she was active in the Guild and Christian Mothers Society. She was also a member of Farmers Union, where she served for over 50 years as Secretary-Treasurer of the Morris Location. Velma enjoyed traveling, dancing, playing cards, reading and cooking for her family. She especially enjoyed the time she spent with family and friends. Velma loved her life on the farm, always proud to be a farmer's wife and working the land beside her husband for many years. She always said, "It will be a sad day whenever I have to leave the farm."

To order memorial trees or send flowers to the family in memory of Velma Blomgren, please visit our flower store.