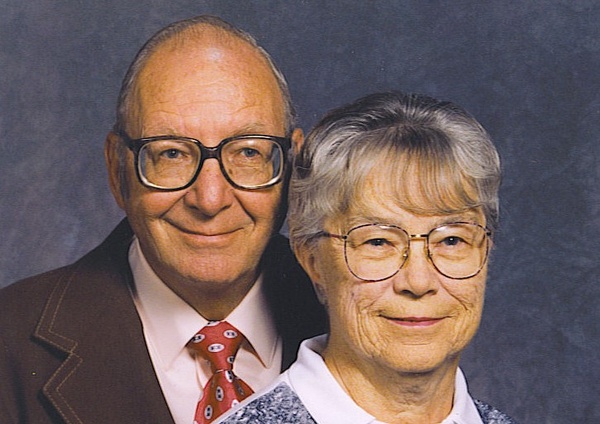 A combined memorial service for William and Arvilla Gausman of Las Vegas, NV, originally of Pepperton Township, MN, will be held on Saturday, November 23, 2019 at 10:30 a.m. at  the Pedersen Funeral Home, 101 South Atlantic Ave., Morris, MN 56267.  A luncheon and burial will follow. Bill and Val will be laid to rest at Pepperton Cemetery. Send condolences and RSVP to: mail@pedersenfh.com. All are welcome. William passed away on Saturday, October 5, 2019 at the age of 92.  Arvilla passed away in March of last year.

William (Bill) was born on July 14, 1927 to Edward and Lena (Andert) Gausman on the family farm in Pepperton Township.  Bill attended grammar school, and graduated High School from Alberta Country School.  As a young adult, he served stateside in the Army for two years during the Korean War.  While in the Army he obtained a private pilot’s license and was able to purchase his own airplane. He regularly flew home on weekends and shuttled other service members.  Bill married Arvilla (Val) Stephens of Pepperton Township, MN in 1954. They began their lives together as farmers. Within two years, Bill was ready to follow his lifelong calling to the ministry.  They moved to Kentucky where Bill obtained his Bachelor’s degree from Asbury College. They moved on to Denver, CO where Bill completed his Bachelor of Divinity Degree at The Iliff School of Theology. On June 15, 1962, he was ordained as a Methodist Minister. He served parishes in both Colorado and Minnesota. In 1970 (now raising 5 children) he settled his family in Denver, where he became a successful entrepreneur - owning several businesses: Among which were The Primrose Motel, a Marriage Counseling Service, and The Little Brown Chapel at Heritage Square.  In 1983 they built a house on 40 acres in Kiowa, CO. spending 20 years there before formally retiring in Las Vegas, NV. Bill provided the family with many great adventures that often included their much-loved activities of camping, boating, and fishing.   Bill was gifted musically and artistically. He sang and played many instruments. He painted and was an avid photographer.  He built two houses and authored two books .He left a special legacy by performing the weddings of three of his Grandchildren.  Bill was a beloved husband, father, grandfather and great-grandfather. He will be dearly missed.

He is survived by his children: Loren Gausman of Las Vegas, NV, Claire Papalia of San Dimas, CA, Chyrl Gausman of Aurora, CO, and Wanda Gausman of Aurora, Co; his grandchildren: Brian Gausman, William and Robert Klabunde, Natasha Knudsen, Megan Berg, and Micah Papalia; several Great Grandchildren, nieces and nephews. He was preceded in death by his wife: Arvilla Gausman; his daughter: Theresa Klabunde; his parents: Edward and Lena Gausman; and his siblings: Howard, Earl and Allen (Fuzz) Gausman, and Jeanette Janecek.

RSVP to: mail@pedersenfh.com. All are welcome.

To order memorial trees or send flowers to the family in memory of William Gausman, please visit our flower store.