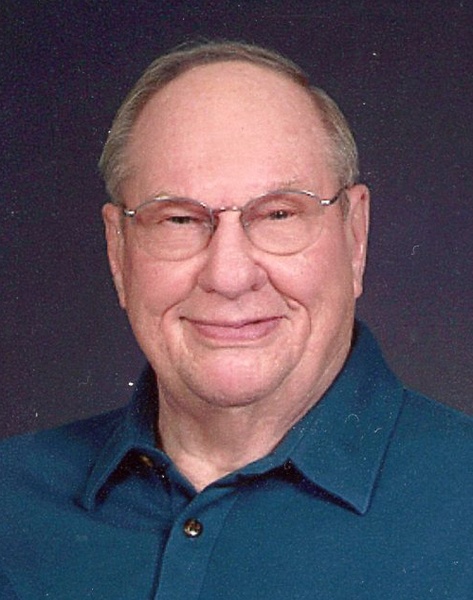 Funeral services for William "Bill" Dripps will be Thursday, January 18, 2018 at 11:00 a.m. at First Lutheran Church in Morris, with Reverend Dan Belgum-Blad officiating.  Visitation will be Wednesday from 4:00-7:00 p.m. with a prayer service at 7:00 p.m. at First Lutheran Church and one hour prior to the services at the church on Thursday.  Burial will be at Summit Cemetery in Morris. Military rites will be provided by the Morris American Legion, V.F.W. and AmVets.

William Gregerson Dripps, son of George and Olga (Gregerson) Dripps, was born June 12, 1930, in Morris, MN.  He was baptized in the Morris Lutheran Church as a young lad.  Bill attended Longfellow school in Morris then graduated as the class president from Morris High School with his class of 1949.  On August 18, 1954, he was united in marriage to Mary Margaret Olsen, from Donnelly, MN, at the Assumption Catholic Parsonage in Morris.

He grew up with his father’s car repair shop/Oldsmobile dealership in his backyard and was surrounded by cars and trucks his whole life.  Bill helped his father at home, then downtown Morris where George built Dripps Motors in 1948, a well-known, local Oldsmobile, GMC and Studebaker dealership. After selling the franchise in 1984, he continued his career at Berger Chevrolet Oldsmobile which became Heartland Motor Company where he worked until his retirement in 2011.

After high school graduation, Bill attended the General Motors Institute in Flint, Michigan, where he became a General Motors service technician.  His schooling was cut short by Uncle Sam when the Morris National Guard was federalized in 1951.  In the summer, Bill was a munitions instructor for the National Guard in Camp Ripley MN.  Later he was sent to Camp Rucker, Alabama.  While, at Rucker the names were drawn out of a hat for deployment to Korea.  A new adventure began for Bill when he and good friend Grant Gray’s names were drawn along with many others.  Bill was promoted to Master Sergeant out of the Morris National Guard, 47th infantry “Viking” division.  He received an honorable discharge from the US Army in August, 1952.

Some of Bill’s interests were playing in the high school band.  Bill was a long-term member of the choir at the Lutheran Church where he sang tenor. He also sang in many other vocal groups.  He was involved in a bowling league. He was a member of the American Legion, VFW, Morris Lions Club, where he served a term as president and a member of the hospital board.

Bill enjoyed family, fishing, hunting, roller skating, gardening, traveling around on road trips, driving around Morris, Donnelly and the surrounding area. He could fix anything and applied those skills at the dealership as well as the family home.  Bill and Mary enjoyed wintering in Arizona for several years.  He loved to drive and ride in parades.

He is survived by his five children: Debra (Peter J.) Haug of St. Cloud, Joni (Dale Wincell) Donohue of Minneapolis, David (Laurie) Dripps of Mantorville, Dan (Jackie) Dripps of Morris, and Anne Dripps of Waite Park; four grandchildren: Erin Haug, Rachel Haug, Nicholas Dripps, and Jacob Dripps; one brother: Charles (Lois) Seldon of Boise, ID; one nephew; two nieces and many cousins. He was preceded in death by his wife, Mary Margaret Olsen and his parents.