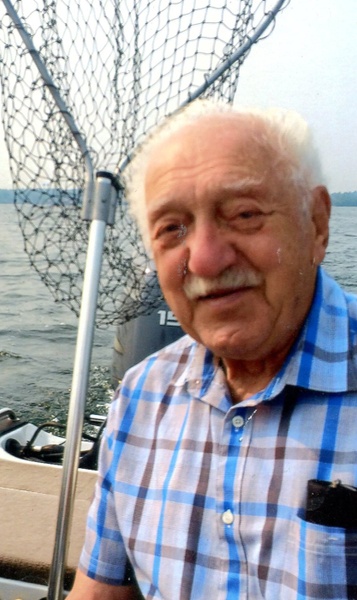 The funeral for William “Bill” Rickmeyer, of Morris, Minnesota will be held on Saturday, February 9, 2019, at 11:00 a.m. at the Zion Lutheran Church in Morris, with Reverend Reed Stockman officiating. Visitation will be on Friday, from 4:00 to 7:00 p.m., with a celebration of life service at 6:30 p.m., at the Pedersen Funeral Home in Morris, and Saturday one hour prior to services at the church. Burial will be held at a later date at the Fair Haven Cemetery, Fair Haven, Minnesota.

William Henry “Bill” Rickmeyer, son of William Henry Christian and Emelia Johanna (Pramann) Rickmeyer was born on June 10, 1930 in St. Cloud, Minnesota. Bill was baptized and confirmed at Holy Cross Lutheran Church in St. Cloud. He attended school in St. Cloud, graduating from St. Cloud Tech. Bill spent his summer months, working for his uncle in the hardware store. He also worked on family and friend’s farms.  He was united in marriage to Phyllis Lambke on December 28, 1952 at the Holy Cross Lutheran Church in St. Cloud.

In the fall of 1950, Bill entered the United States Military, serving as a Supply Sergeant for the 2nd Infantry Division, as well as playing trumpet in the Army Band. Bill served his country during the Korean Conflict.

Bill was more than involved in his community, church, and serving his country. He was an active member of Zion Lutheran Church, holding many positions. Bill was also a member of: Junior Chamber of Commerce “Jaycees”, Kiwanis Club, Veterans of Foreign Wars, American Legion, Am. Vets, and member of the Presidents Club of the University of Minnesota. He served as a Chairman of both the West Central Homes and the Industrial Development Corporation. Bill was on the Board of Directors for Prairie Community Services and Day Activity Center. He also found time to sing and direct the church choir.  He spent countless hours volunteering for Meals on Wheels, and Orphan Grain Train. Bill loved planting thousands of trees, and grasses to give shelter to the wildlife on many acres. He was an avid hunter; supporting Pheasants Forever, Ducks Unlimited, and Deer Hunters for many years.

With all this, Bill found time to take his beloved wife dancing, tending to flowers and gardens, and feeding the birds.  One of his biggest joys was spending time with his children and grandchildren.  Bill and Phyllis enjoyed traveling in the U.S., Canada, and abroad. Most of all, Bill will be remembered for the love of his family and his faith in God.

Bill died unexpectedly on Monday, February 4, 2019 at the Stevens Community Medical Center in Morris. He was 88 years old.

To order memorial trees or send flowers to the family in memory of William "Bill" Rickmeyer, please visit our flower store.