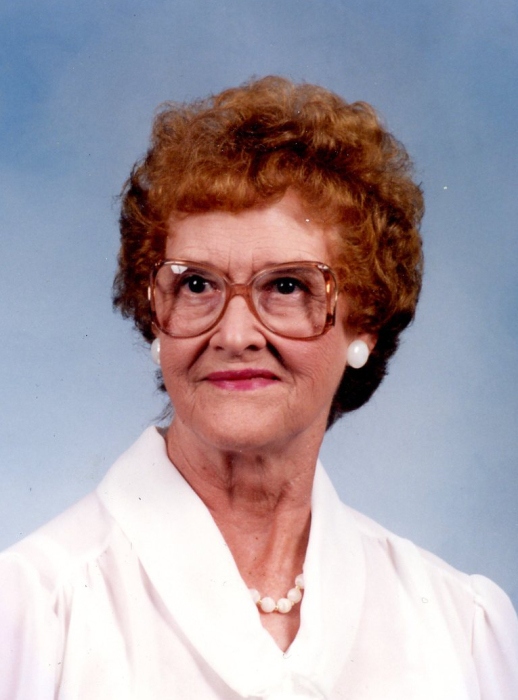 The funeral for Winifred Erdman, of Benson, formerly of Holloway, Minnesota will be held on Thursday, July 12, 2018 at 2:00 p.m. at the Trinity Lutheran Church, Fairfield Township, near Holloway, Minnesota; Reverend John Ramsbacher will be officiating. Visitation will be Thursday, one hour prior to services at the church. Burial will be at the Trinity Lutheran Cemetery, near Holloway.

Winifred Delores Schlieman, daughter of Alfred and Dora (Mecklenburg) Schlieman was born on October 18, 1925 in Fairfield Township in Swift County, Minnesota. She was baptized in 1925 and confirmed on April 4, 1939 at Trinity Lutheran Church, Fairfield Township. Winifred grew up on a farm 15 miles North of Appleton, Minnesota. She attended the one room country school District #43 through the 8th grade.  Winifred met her husband Herman Erdman at a dance; the couple married on September 1, 1943 at Trinity Lutheran Church.  Herman and Winifred farmed, had dairy cows, and raised and sold beef cows. Their oldest son, Gary helped with the beef project.

Winifred lead a busy life being a farm wife, making delicious cakes, pies, and goodies to serve her family and friends for “lunches” and raising and butchering chickens, gardening and canning fruits and vegetables. The couple took time off and enjoyed themselves as “Winter Texans” at Harlingen. They met and became friends with many; playing cards, shelling, bowling and dancing were several activities they enjoyed. In the summer, they enjoyed fishing and spending time “Up North” with relatives and friends. Herman died on April 19, 1989. Winifred continued wintering in Texas, where she took up painting; painting many beautiful pictures. She was also very proud of obtaining her GED in May of 1991, being an honor student. Winifred silently grieved the passing of Herman, and her son Gary in October of 2005. She moved off the farm in November of 2012 and resided in Benson, Minnesota.

Winifred led a dedicated life to the Lord, having been baptized, confirmed, married and buried at Trinity Lutheran Church, Fairfield Township. Blessed be her memory!

Winifred died on Sunday, July 8, 2018 at the Stevens Community Medical Center in Morris, Minnesota. She was 92 years old.

To order memorial trees or send flowers to the family in memory of Winifred Erdman, please visit our flower store.